Ever wondered what it’d be like to drive a supercar every day? To work, to the shops, to the gym, to the in-laws for dinner. Well, McLaren now offers a vehicle that is designed to serve exactly that purpose. 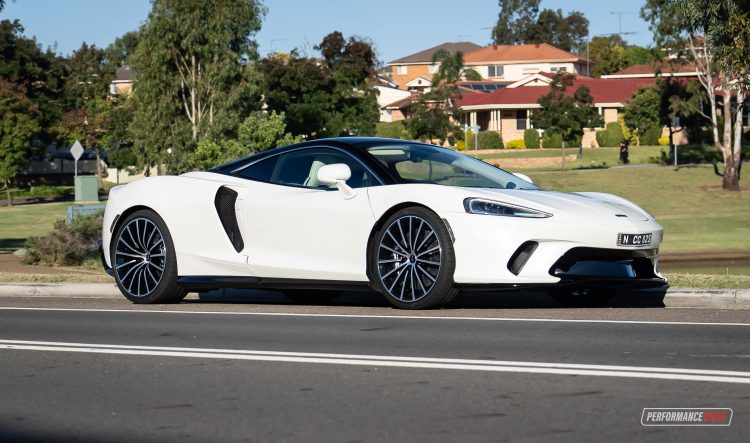 Called the GT – a set of letters that have long-been known to represent grand touring – this new model takes up where the old 570GT left off. McLaren is closing off its entry level Sports Series of supercars and now it has classes; GT, Supercar, Ultimate, and Legacy. The latter is for past or passing models, including the 540C, 570S, and the 570GT. The new ‘GT’ class contains only this GT for now, but that might change in the future.

So what is the GT (the car, not the class) all about? The company says it has been designed to be used as a daily driver, and it features the biggest boot of any McLaren, the most ground clearance, and the most cup holders. But don’t worry, all of this doesn’t come at the cost of sacrificing the company’s renowned performance pedigree. The top speed is over 320km/h (200mph), and the twin-turbo V8 engine is supremely powerful.

* Figures as tested by PerformanceDrive on the day. Factory claims may be different 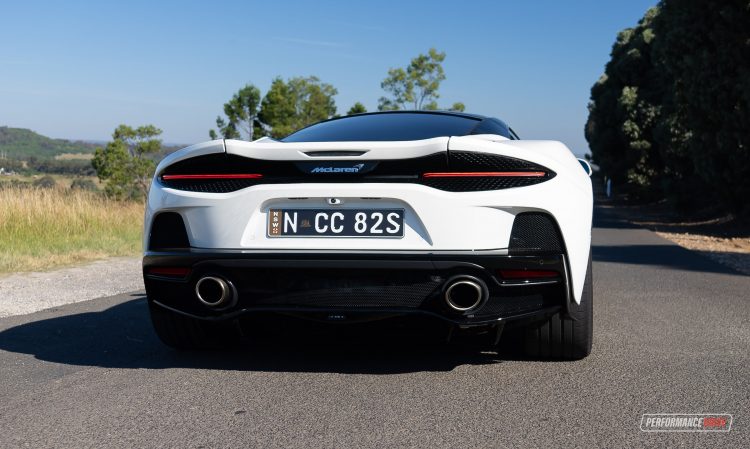 As you can tell just by looking at this gorgeous concoction of carbon fibre, aluminium, and many nuts and bolts, the McLaren GT is still a supercar at heart. It gets the symbolic dihedral up-swinging doors, arguably the ultimate expression of automotive posing and extravagance, as well as a carbon fibre tub chassis known as the Monocell II, with aluminium panels to keep weight to a minimum. 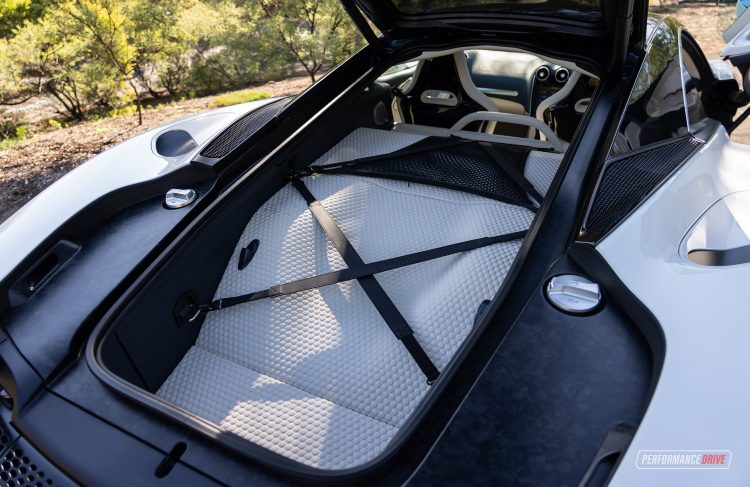 This platform is shared with the 720S and engineers have grafted a special carbon fibre rear deck that supports a proper boot area. Accessing the boot is done via a power-operated glass hatch lid. It is a shame not to see a spectacular engine under the hatch, as per regular supercar standards, but McLaren has done a fantastic job of creating a special, almost sacred-looking bed for your belongings to rest upon.

The leatherette-clad boot floor flows elegantly towards the cabin, and the available space is impressive, measuring at 420L. Apparently that’s big enough for a golf bag. We can’t confirm that as we don’t play golf. But we can confirm it is large enough to support a weekly shopping run for a small family.

There’s another storage area at the front, under the bonnet, offering 150L. It features a 12V socket and fire extinguisher. Yep, it is quite funny seeing such a practical-minded fixture sharing space with a fire extinguisher. But that’s the nature of the car. That’s what this is all about. Drive it to the shops… on your way home from a track day. Chuck a powered cooler box in the front for that weekend away. Run your daily errands. Do it all. 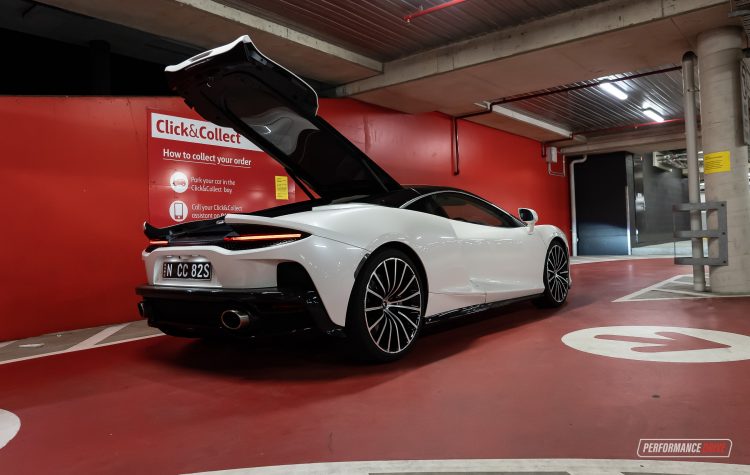 The cockpit tries to be as everyday friendly as it can be, but it does fall short in some areas. For example, this is still a very low car, so getting in and out never looks good unless you’re as toned and as flexible as an olympic diver. The seats also seem firm, with thin padding for the lower section not helping with long distance travel. Although, that could be subject to this low-kilometre test car.

When you look around the place it’s easy to see this is a much more premium-focused model than any other McLaren within this price range. Even just the metallic trimmings around some of the switchgear make it look fancy and more luxurious. In other words, this doesn’t feel like a stripped-out racing car with only the bare essentials inside. Buyers can choose between ‘Pioneer’ and ‘Luxe’ interior themes which provide either a sporty aesthetic or a classically elegant decor, and there are plenty of bespoke MSO appointments you can select from for added exclusivity. 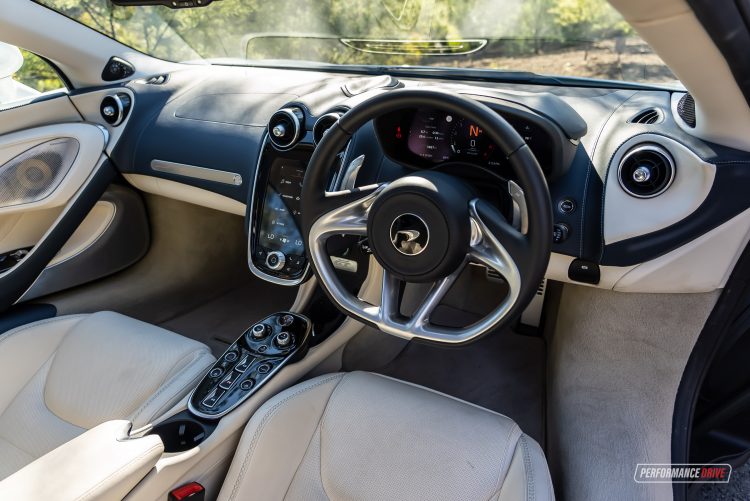 McLaren has updated its touch-screen interface in recent times so now it presents not only a crisper screen and more responsive touch functionality, but the menus and graphics are improved. In some past McLarens it almost feels like the touch-screen was a last-minute thought. With this you can go deeper into menus and fiddle around with the car settings, while sat-nav, digital radio, and voice command come standard.

We love that there are three cup holders in here as well as a centre storage box under the armrest (just big enough for a smartphone), complete with phone charging facilities, but we’re not impressed with the Bowers & Wilkins sound system. We know that’s a very high-end brand but we expected a much beefier and higher-quality audio experience. We tried fiddling around with the audio setttings but it didn’t help. Even if it is only the standard unit, at this price we feel like every element of the car should be nothing short of outstanding. Particularly for a grand tourer. 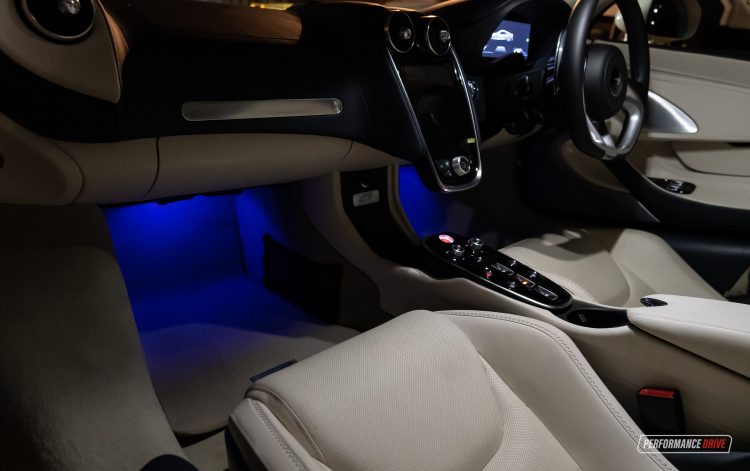 Tucked away somewhere under that big boot is the ‘M840TE’ 4.0-litre twin-turbo V8. This is pretty much McLaren’s latest and greatest petrol engine, and it’s installed in only the utmost models in the showroom, such as the 720S, and even the Speedtail and Senna hypercar models. In the GT it is detuned, so to speak, and produces 456kW at 7500rpm, and 630Nm between 5500-6500rpm.

This is sent through a faultless, fast-changing seven-speed dual-clutch transmission and into a tight rear-wheel drive system. First question you’re probably going to ask, is it fast? Well the numbers definitely speak supercar language. Acceleration across 0-100km/h takes a claimed 3.2 seconds and 0-200km/h takes a claimed 9.0 seconds. During our testing, with a Vbox and a private road, we clocked those sprints in a best of 3.34 seconds and 9.20 seconds, respectively.

That’s some serious speed, particularly our 0-200km/h time. And this is in the real world, with very little preparation to the car aside from tyre pressure checks, air-con off, and windows shut. In other words, you could achieve these times too. On a prepared drag strip in good weather conditions, we have no doubt the car could reach the claimed figures, or even surpass them. 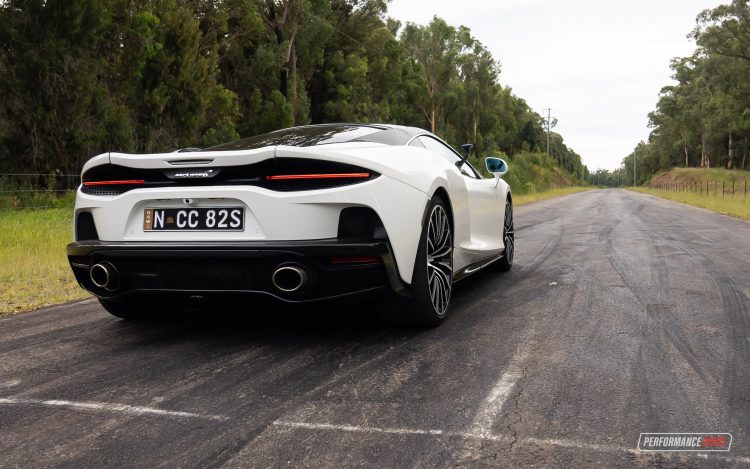 If you’re worried about forced induction taking some of the character and sound away from the engine, don’t be. Yes, it doesn’t produce the crying shriek of a Lamborghini V10, but it does go through similar stages of emotion as the revs climb. For instance, during low revs there is a seductive burble from the exhaust and you can hear the turbos spooling with a distinct and almost chilling whistle.

From here you can experience the build-up of surging acceleration, which comes on like a giant wave of thrust. The tipping point is about 4000pm, just as things start to roar and bark with much more aggression. Beyond 5000rpm, if you have the throttle buried in the carpet, that’s it. Hold on because you’re away.

The hard and fast-revving character of this engine reminds us of a super sports bike. It kind of sounds like one too at high revs. And it just doesn’t give up. At all. Relentless power hurtles you along. It’s not unusual to be frightened by this level of performance. In fact, we think a heated passenger ride would be more thrilling than any rollercoaster. 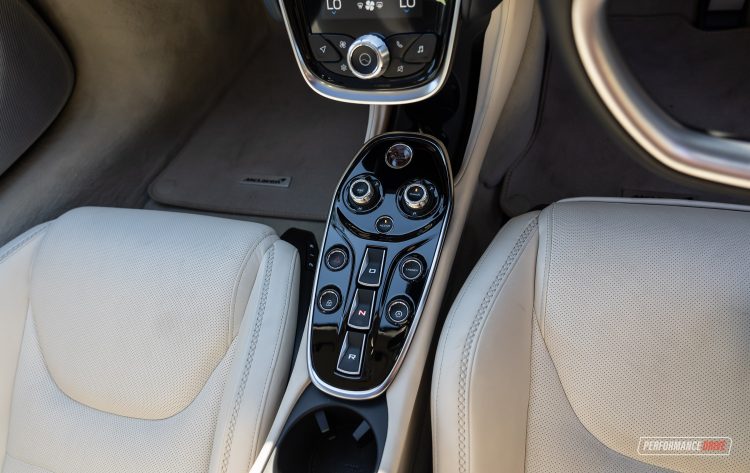 There is a launch control function which does this cool ‘boost building’ sequence, before catapulting you off the line. But the initial acceleration is not as savage as an all-wheel drive supercar, or a high-powered electric car for that matter. Where this excels, certainly beyond any electric car we’ve driven, is in the top end. We’re not sure how long it takes to hit the top speed of 326km/h, but it wouldn’t be long.

Tackling corners in the GT is pretty much exactly what you’d expect. It handles like it’s on rails, with virtually no body roll and only endless levels of grip – aside from some exciting skittish wheelspin during low gears. Unlike some rivals the GT uses a hydraulic steering setup as well, which is really refreshing in this day and age. It reminds us how good steering systems used to be.

You get instant feedback at all times so you know what you need to do as a driver, and there are no surprises in terms of unexpected kickback or not knowing how the tyres are coping. It just does what you tell it, when you tell it. It’s literally as straight-forward as that. Out on a windy country road or mountain pass this thing is just superb. At times it feels illegal to be able to drive something so engaging and stimulating. And with that engine popping and sneezing right behind you, the driving experience is pure, unadulterated bliss. 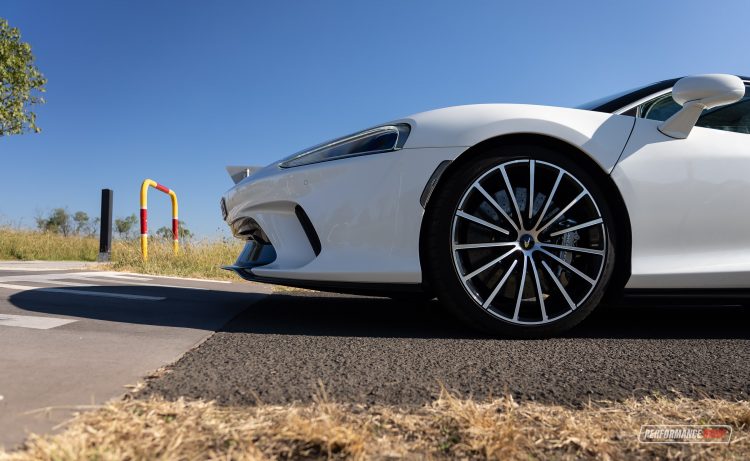 As compelling as all of that sounds for a Sunday morning blast, remember this is pitched as an everyday supercar. So how does it handle driving to the supermarket? Well, for one, the up-turned lower front skirt means no scraping on speed bumps, and you can opt for a hydraulic nose-lift mechanism for really nasty driveways.

The ride comfort is also surprisingly forgiving and absorbent, despite being so low to the ground and with limited suspension travel. Visibility is great thanks to a large dome-like cabin glasshouse. Although, the permanently-open sunroof on this test car did get annoying after a while. It’s slightly tinted but the constant brightness of the cabin, especially with this Porcelain leather combination, you start to feel like the pope sitting his glass box, on display for everyone to see.

Overall, yes, sure, this is a very practical supercar and you could drive it every day without suffering from some of typical concerns that supercars are known for. However, we would do some careful selections with the options to ensure optimum comfort, and upgrade to a better stereo. At the end of the day though it is still a supercar that just wants to be unleashed. This is mostly about speed and attention-grabbing excitement. 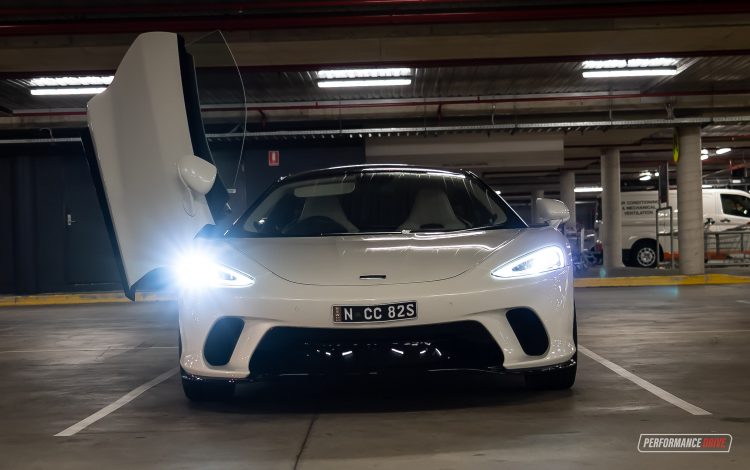 McLaren’s onward and upward evolution of the road-going motor car is clearly demonstrated with each new product it launches. As proven once again with launch of the GT. This is one of the best-made models we’ve sampled, with real quality touches throughout the cabin that help it overlap the traits of both supercars and grand touring luxury cars.

The fact that it is a premium proposition with genuine creature comforts, user-friendly features, and that it offers useable boot space means that yes, you could certainly use this as a daily driver. It is, as McLaren promises, the embodiment of the everyday supercar.

As always, if you’re thinking about buying a new car don’t forget to click here to speak with our car buying specialists.