FORT WORTH — Pato O’Ward passed Josef Newgarden with 23 laps to go Sunday at Texas, and the Mexican-born driver stayed in front for his first IndyCar victory at what he considers his home track.

O’Ward celebrated four days before his 22nd birthday while driving for Arrow McLaren SP, and the organization will follow through with a promise to let him test a Formula One car at the end of the year.

The race was the second in as many days at Texas, and was marred by the IndyCar’s second first-lap crash of the season.

Six cars were done before they reached the green flag, when Pietro Fittipaldi hit Sebastien Bourdais from behind, knocking the four-time open-wheel champion into Alexander Rossi. The cars of Ed Jones, Dalton Kellett and Conor Daly also were destroyed in the crash that happened as they approached the start-finish line for first time.

Daly, who was starting at the back of the 24-car field, got knocked upside down after he got caught between two other cars. He skidded along the front stretch before the car planted into the rain-saturated infield grass and flipped back onto its wheels.

The races on consecutive days in Texas concluded an exhausting stretch of four races over three weekends to open the season before the series moves to Indianapolis for the rest of May. The road course race is May 15, with the Indianapolis 500 on May 30.

Newgarden finished 1.2443 seconds behind O’Ward, giving Chevrolet a 1-2 finish and its first victory this season.

Dixon led 206 of 212 laps on Saturday night, when he finished ahead of fellow New Zealander and IndyCar rookie Scott McLaughlin. It was Dixon’s fifth win at Texas and No. 51 for his career overall.

O’Ward, who grew up at times in San Antonio, Texas, got his first win in his 26th IndyCar start and second full season.

McLaren told him at the start of the season that he could test the F1 car at the end of the year if he won an IndyCar race. Moments after the race, Zak Brown, head of McLaren’s F1 team, tweeted “A deal’s a deal ⁦‪PatricioOWard‬⁩ — what a win! See you in Abu Dhabi later this year!”

Daly said he wasn’t really sure what happened at the start of the race, and that everyone had started to accelerate before the accordion effect created chaos.

“It just takes one person when everybody is nose to tail,” he said.

Fittipaldi, who at Texas ran his first IndyCar races since 2018, said the field suddenly showed down ahead of him and, “I had nowhere to go.” He said he had a sprained finger.

“Watching that, I’m glad Conor is OK, glad everybody is OK,” Rossi said when viewing a replay.

Rossi was critical of IndyCar setting the start by points rather than qualifying on speed, particularly with the early Sunday evening start and teams sitting idle most of the day. It put cars of varying speeds throughout the field, a factor in the crash as the cars tried to get up to speed heading to the green flag.

There was also some hard contact for Tony Kanaan, who was able to keep racing. James Hinchcliffe had issues after driving through the fray, and completed only 30 laps between several extended stops before parking the car for good.

Foyt’s team had worked late into the night to rebuild the No. 14 Chevrolet for Bourdais after he was hit from behind by Josef Newgarden only 56 laps into Saturday’s race. Bourdais was running sixth when he spun and the car backed hard into the outside wall.

Bourdais and his Foyt teammate Kellett were both involved in the opening crash Sunday.

“It’s a real shame that two days in a row we get drilled and taken out of the race,” Bourdais said. “A very expensive couple of days for A.J. Foyt Racing. … The guys worked until midnight to fix the car, and can’t even take the green flag.” 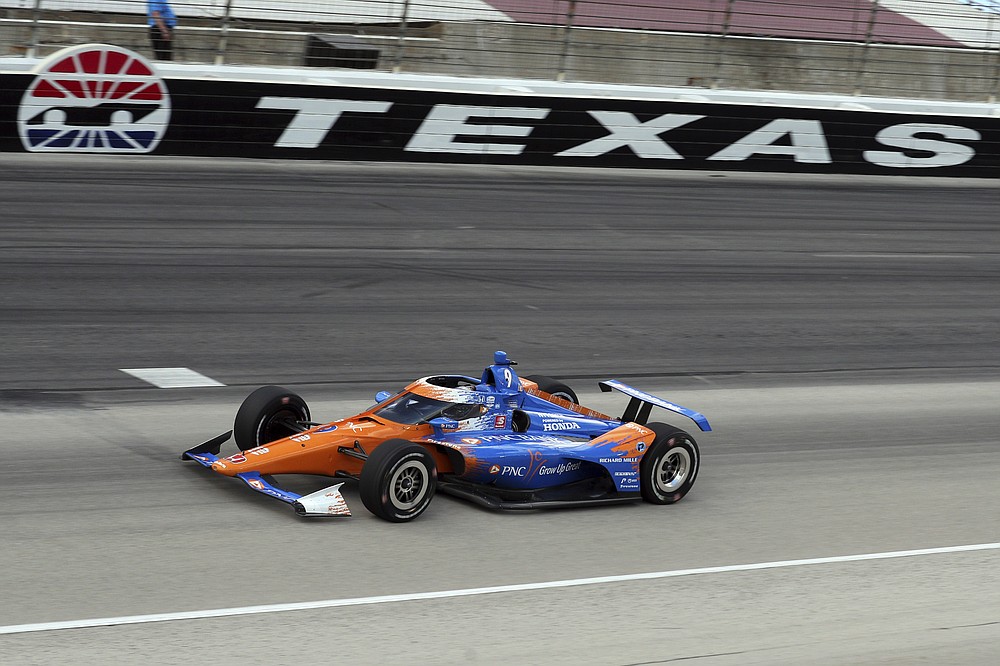 Scott Dixon comes out of turn four during an IndyCar Series auto race at Texas Motor Speedway on Sunday, May 2, 2021, in Fort Worth, Texas. (AP Photo/Richard W. Rodriguez)