The first sprint races of the season in the Italian GT Championship had taken place in early May, and three weeks later BMW Team Italia was in Pergusa (ITA) to compete in the first endurance race of the year. 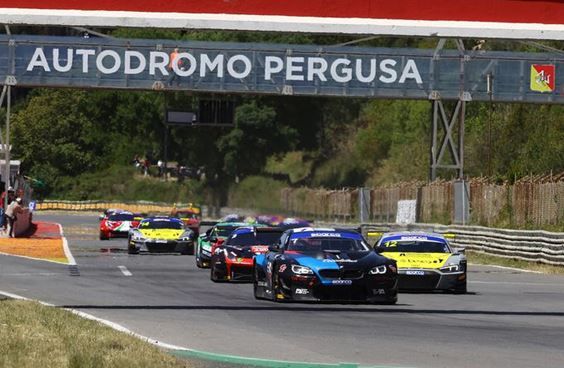 The regular drivers in the #7 BMW M6 GT3, Stefano Comandini (ITA) and Marius Zug (GER), were supported by BMW works driver Bruno Spengler (CAN) as the team’s third driver.

The trio secured pole position in qualifying on Saturday. However, they were forced to retire early from the race.

Their team-mates, Nicola Neri, Giuseppe Fascicolo (both ITA) and Alfred Nilsson (SWE), claimed victory in the GT4 AM class with the #215 BMW M4 GT4.


Riccardo Agostini is king of lake in the Italian GT Endurance


Imperiale Racing third at the end of the first round of the Italian GT Endurance 2021 Championship that has been run at the Circuit of Pergusa, Sicily, last weekend.The Mirandola-based team has been among the front runners with the Lamborghini Huracàn G more >>


Leipert Motorsport from Wegberg scored a strong third place in the 24h Series at Hockenheim on its official GT3 comeback this weekend.Also the start into the European season in mid-April could hardly have been better. As a result, they are now in second place in the overall- and team standings in the Lamborghini Super Trofeo as well as in the ADAC GT4 Ge more >>


Podium start to Italian GT Championship for Middleton at Pergusa


• At old-style Pergusa, an early race mishap that sidelined Basz/Postiglione/Salaquarda car, did not stop come-from-behind win by stubborn trio Agostini/Drudi/Ferrari Across three decades of domestic motorsport activities Audi Sport Italia had no more >>


Following a successful season opener last April at Monza, where he claimed the pole position to clinch the Race 2 victory in the Lamborghini Super Trofeo Europe for Imperiale Racing, Alberto Di Folco is set for the Italian GT Endurance curtain-raiser this coming weekend at Pergusa, driving a Huracán GT3 Evo car of the Modena-based squad with the Lamborghini Genève support. more >>


Victory and leadership in the GT Open for Michele Beretta


Beretta wins race-2 in the first round of the International GT Open at Paul Ricard and is the leader of the championship thanks to an excellent job done with the team, the Vincenzo Sospiri Racing and his team mate Frederik Schandorff.

Michele made his debut more >>


The start of the International GT Open season presented JP Motorsport with a challenge. After a strong performance in qualifying, the McLaren 720s with Christian Klien on board had to finish the race on the first lap through no fault of his own. A successful comeback followed on Sunday with the fourth overall place in the second race, resulting in the Pro-Am victory at the Circuit Paul Ricard. more >>


On the eve of the first round of the International GT Open Michele is looking forward to tackling this new engagement at the wheel of the Lamborghini. With Frederik Schandorff and the Vincenzo Sospiri Racing alongside him, he has what it takes to aim for the top of the championship.  more >>


Shanghai International Circuit, ChinaAfter a sabbatical of more than 12-months, sporting competition in China is finally starting to return to venues all across the country despite the ongoing effects of the pandemic which continues to more >>


The International GT Open event in Paul Ricard is on the agenda of JP Motorsport this weekend. Christian Klien and Patryk Krupinski will be racing with the McLaren 720S GT3 for the first time.


INTERNATIONAL GT OPEN AND GT OPEN CUP       AKM Motorsport by Antonelli starts its International GT Open campaign at Le Castellet this coming weekend, 14/16 May. The San Marino-based squad, in its third year with the Mercedes, will line-up two AMG more >>


Coppa Italia – From seventh on the grid to the podium

On the second weekend of the Italian club sport racing series Coppa Italia Turismo Carlotta Fedeli managed a remarkable recovery in the first sprint. The 29-year-old driver had started seventh in the Audi RS 3 LMS fielded by RC Motorsport at Imo more >>


Petr Kacirek clinched a trophy for Team Duck Racing in the second round of the Eset Cup. The Czech crossed the finish line in third place in the GT3 class in the Audi R8 LMS in the second sprint race at the Slovakiaring. more >>


The Norwegian GT race series featured an Audi R8 LMS for the first time. Local race driver Wiggo Dalmo won the first sprint with a ten-second advantage on the Vålerbanen circuit in the inaugural event. In the seco more >>


The Audi customer team YC Racing started the new GT Super Sprint Challenge race series at Shanghai with a good result. Ray Wu from China in the team’s Audi R8 LMS improved from fourth on the grid to second position in the Am Masters class in the first race. In the second race, Xing Yanbin in another Audi R8 LMS overtook his more >>


Richardson Racing secured a brace of rookie class podium finishes from the opening rounds of the new Michelin Ginetta Junior Championship season at Thruxton.The Corby-based team headed for the more >>


Breakell Racing enjoyed a fantastic debut weekend of Ginetta competition at Thruxton (08/09 May), with a standout performance seeing Max Coates qualify on the front row and challenge for a podium finish in the Protyre Motorsport Ginetta GT5 Challenge.The Lanca more >>


Jay Morton races into Britcar Championship with Praga and Motus One


Wolf Racing Cars kicked off its season on a high last weekend in Monza in the fourth year as the soul of the Italian Sports Prototypes 2018-2022 with the successful Wolf GB08 Thunder pushed by the Aprilia 1.0 engine and fitting Yokohama tyres. The new single-make formula for the sports prototypes developed by the Italian manufacturer did not experience any crisis as 21 Thunder challengers got o more >>


Excitement and twists characterized the opening round of the Italian GT Sprint 2021 Championship that has been run in Monza and Imperiale Racing confirmed its value with the usual grit being among the protagonists of the highest class of the Italian GT cars.The Mirandola-based te more >>


Richardson Racing can today confirm that it will field a multi-car line-up in the 2021 Michelin Ginetta Junior Championship, which kicks off this weekend at Thruxton.The Corby-based team will head into the new season looking to maintain the front-running form it more >>


The Italian GT Championship kicked off the 2021 season on the first weekend in May in Monza (ITA).


Among those in action again: BMW Team Italia. It proved to be a successful start to the season for the #215 BMW M4 GT4. more >>


The BMW M2 CS Racing Cup Italy held its first races of the 2021 season in Monza, Italy on the first weekend of May. Race one on Saturday saw heavy rain.
The first win of the year was secured by Filippo Maria Zanin (ITA) in the #19 BMW M2 CS Racing of Pro Motorsport BMW more >>


Meanwhile, across the pond in Italy, Lamborghini enjoyed a promising start to the Italian GT Championship season with a pair of top five finishes in the opening Sprint Cup race of the year at Monza.Imperiale Racing’s new partnership of Ale more >>

• On Sunday afternoon Riccardo Agostini defends for ten laps with tooth and nail the second position that Lorenzo Ferrari had snatched in qualifying, and the duo is runnerup after two races, albeit level on points with the rival duo• Vito Postig more >>


AKM Motorsport by Antonelli has defined its Italian GT Sprint program since the Monza curtain-raiser this coming weekend.The San Marino-based squad headed by Marco Antonelli continues its commitment in the high-level championship with a young pairing, fielding a Mercede more >>