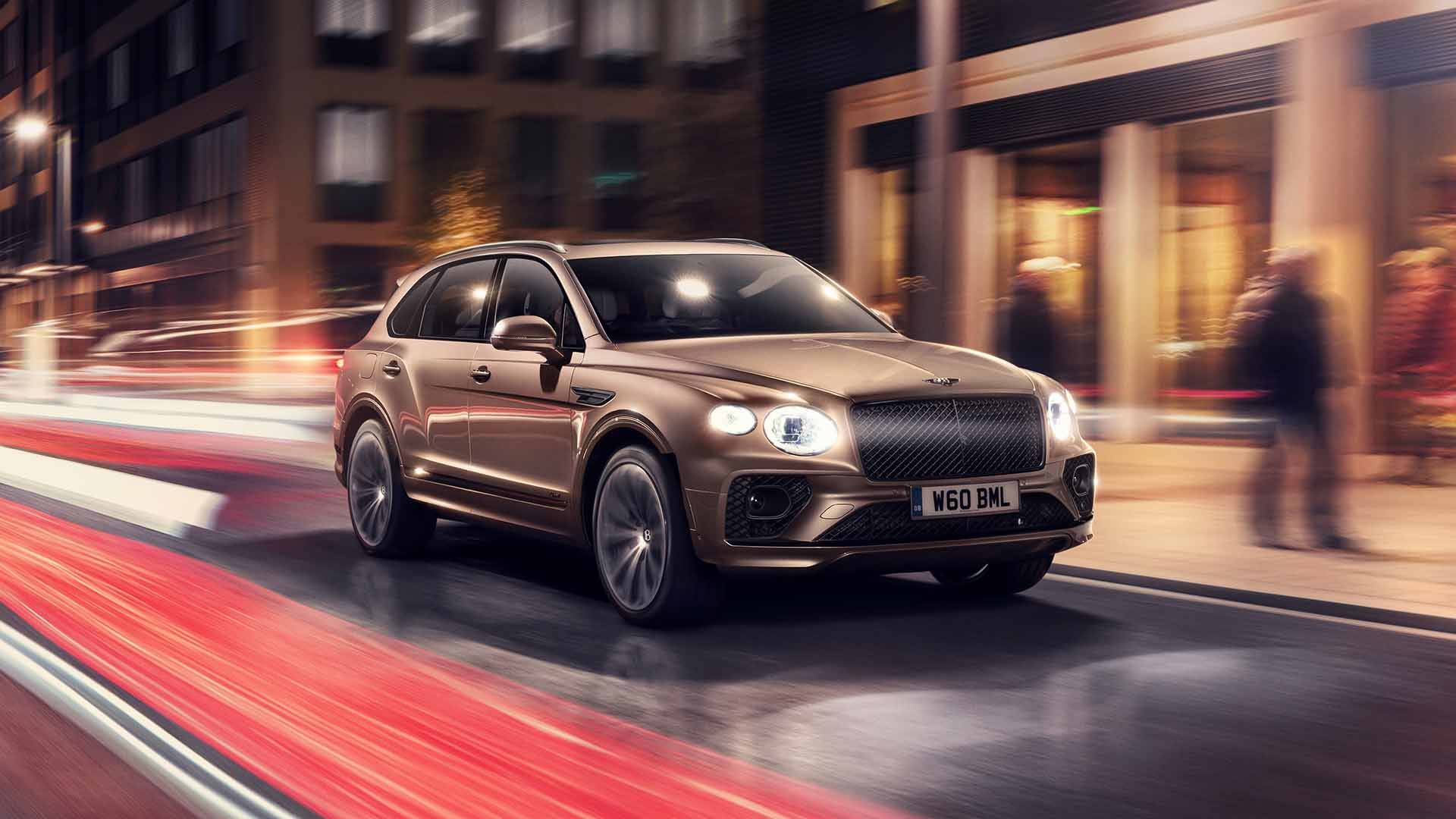 Luxury SUVs are arguably the most desirable cars in the world. Almost every premium manufacturer in Europe offers a high-riding luxury vehicle, with even Lamborghini and Rolls-Royce getting in on the act. A Ferrari SUV should arrive in 2022.

It’s not hard to see the appeal. These cars offer the comfort and prestige of a luxury saloon, but with the added option of being able to venture off-road. You also get a commanding driving position and enough space inside to rival a boutique hotel room.

We’ve pulled together a list of the best luxury SUVs to buy in 2021, with our choices presented in alphabetical order.

Who’d have a thought a list of the best luxury SUVs would begin with an Aston Martin? While the idea might have seemed far-fetched a decade ago, Aston Martin needs the DBX to compete with rivals such as Lamborghini and Bentley. Its future depends on it. Spoiler alert: the Aston Martin DBX is the best thing to come out of Wales since the Manic Street Preachers.

Aston’s design for life is powered by the same 4.0-litre V8 found in the Vantage, which packs enough punch to propel the 2.25-tonne DBX to 62mph in 4.5 seconds. It’s brilliant to drive, both on- and off-road, while the stylish and intricately-designed interior is a joy to behold.

We said: ‘Five years in development, and you can tell. The Aston Martin DBX feels a cut above other posh SUVs – and convincingly feels like a genuine sporting super-SUV. It looks striking (wait until you see it in the metal), and the interior is magnificent, while practicality is like nothing the company’s ever made.’

The Audi Q7 is as big, bold and brash as you’d expect a large SUV to be. It also happens to be one of the most affordable ways into the luxury SUV lifestyle, with prices starting at less than £60,000. That said, you don’t need to tick too many option boxes before the price gets a little scary. The high-spec Vorsprung model weighs in at £83,000.

Standard specification is generous, with all models getting seven seats, air suspension, Matrix LED headlights, dual-zone climate control, two touchscreens and a 12.3-inch digital instrument panel. The list of powertrains includes 3.0-litre V6 petrol and diesel engines, a plug-in hybrid and, in the case of the SQ7 performance SUV, a 4.0-litre V8.

We said: ‘The Q7 majors on comfort rather than precision, with its air suspension delivering a cushion-soft ride if you resist the lure of huge alloy wheels. Inside, you’ll find a near-faultless and high-tech cabin, plus a huge amount of passenger and luggage space.’

A few eyebrows were raised when Bentley announced it was building an SUV, but the Bentayga is the ultimate expression of the luxury off-roader. At £150,000 before options, it’s also one of the most expensive. Not that you’ll ever feel short-changed – the Bentley Bentayga is a class act.

Pre-facelift sales of 20,000 would suggest that Bentley perfected its SUV from the outset, but that didn’t stop it from rolling out a comprehensive update in 2020. All new panels in front of the windscreen, cut-glass LED headlights, new oval lights at the back and an even more indulgent interior distinguish the new Bentayga from the old.

We said: ‘The latest Bentley Bentayga is a prettier, more bespoke machine than before, with an even nicer interior and enhanced practicality to back up its SUV credentials. It’s ultimately bettered by the Aston Martin DBX, which provides a route map for the development path needed for the next-generation Bentayga. But as a well-rounded update to make the most of what it has at the moment, Bentley’s done a fine job.’

The BMW X7 is a 7 Series saloon on stilts. A large SUV for buyers who demand more luxury than the X5 premium SUV can deliver. It’s the first time BMW has offered a genuine Range Rover rival, with the X7 offering peerless on-road presence and enough off-road talent for most buyers.

Prices start from £75,000, but you’ll pay £93,000 for the M50i version. It’s more affordable than the Bentayga, albeit without the extra layer of opulence. Seven seats come as standard, although an optional six-seat design creates more room for passengers in the second row. The off-road package costs £2,500 and features a choice of driving modes.

We said: ‘The X7 is the antithesis of the compact crossover. It’s an unashamedly big, bold SUV that has much in common with the tech-laden BMW 7 Series.’

The idea of a Lamborghini SUV isn’t a new one. Car enthusiasts of a certain age will remember the ‘Rambo Lambo’ LM002 of the late 1980s and early 90s. Not that this stopped many from choking on their Ricicles when Lamborghini unveiled the Urus SUV.

In truth, the Urus feels more like a supercar rival than a true luxury SUV. Lamborghini calls it a ‘Super Sport Utility Vehicle’, highlighting its ferocious pace and incredible handling. Power is sourced from a 4.0-litre twin-turbocharged V8 producing 650hp, which is enough to propel the Urus to 62mph in 3.6 seconds, before reaching a top speed of 190mph.

We said: ‘Confession time: I was one of those Porsche diehards who complained about the Cayenne, and part of me feels the Urus isn’t a ‘proper’ Lamborghini either. However, it’s an accomplished all-rounder with more performance and presence than any other SUV on sale. And that, I suspect, is precisely what buyers will want.’

Once upon a time, the plutocrats and oligarchs of Europe rolled around in a Mercedes-Benz S-Class, with a driver to whisk them from superyacht to helicopter. Today, they’re just as likely to be seen in the back of a GLS, the firm’s largest and most intimidating SUV.

We’d argue that it’s too big for British roads, but that’s true of the majority of vehicles listed here. Cast aside size matters to enjoy the ultimate expression of Mercedes luxury, especially if you opt for the £171,500 Maybach GLS 600 4Matic First Class. Alternatively, select one of the Mercedes-AMG models, which offer the performance to rival a sports car.

Don’t knock it. It’s thanks to the Cayenne and Macan that Porsche is able to continue building cars like the 911 and 718. This alone wouldn’t be enough to secure a place on our list of the best luxury SUVs, so it’s fortunate that the Cayenne is an impressive Porsche in its own right.

Even the ‘basic’ Cayenne can hit 62mph in 6.2 seconds before reaching a top speed of 152mph. At the opposite end of the spectrum, the Cayenne Turbo S E-Hybrid packs a 680hp punch and an ability to return up to 74.3mpg. Few SUVs are as sweet to drive as the Cayenne, and you get the added benefit of an interior that feels as upmarket as SUVs at twice the price.

We said: ‘The Cayenne is expensive to buy and run, but offers explosive performance and, for an SUV, a sporty and surprisingly engaging drive.’

The Range Rover has been the luxury SUV of choice since 1970. Although the latest incarnation is a world away from the wipe-clean and hose-down spec of the original, the Range Rover retains its unrivalled off-road capability and peerless image.

Although a new Range Rover is on the way in 2021, the current model remains an ‘affordable’ alternative to the Bentayga and DBX. Prices start from £84,000, although a long-wheelbase SVAutobiography costs £170,000. The entry-level Range Rover Vogue features 20-inch alloy wheels, Matrix LED headlights, fixed panoramic roof, perforated Windsor leather seats with 20-way electric adjustment, a Meridian sound system and a rear camera.

Running costs are high, although the P400e plug-in hybrid offers an all-electric driving range of 25 miles and average fuel economy of 82.3mpg. Most Range Rover drivers stay on the straight and narrow, which means they miss out on the SUV’s brilliant off-road ability. The wading depth is just one of the Range Rover’s impressive features.

The Rolls-Royce Cullinan is, by some margin, the most expensive luxury SUV on our list. Taking options out of the equation, it’s around £100,000 more expensive than a Bentley Bentayga W12 or a fully-loaded Range Rover SVAutobiography. Bank on spending £250,000 before you’ve personalised your high-rollin’ Rolls-Royce.

Its stying will divide opinion – the Cullinan is more imposing than it is stately. However, the level of craftsmanship is on another level to the other luxury SUVs – it’s best to think of it as a ‘Phantom SUV’. Inside, it’s as quiet as a church mouse, while the ride comfort is matched only by… well, a Rolls-Royce.

We said: ‘For many, the Cullinan will forever be too ostentatious, too arriviste: the Rolls-Royce most likely to be seen on Instagram. Put such preconceptions to one side, though, and you’ll discover the finest SUV on sale, one that transcends mere transport and makes every journey a special event. Even a stop-start commute on the M25.’

If the inclusion of a Volkswagen on this list seems a little odd, hear us out. The Touareg is based on the same platform as the Audi Q7, Bentley Bentayga, Lamborghini Urus and Porsche Cayenne, so it feels like a cut-price ticket into the world of posh SUVs. Prices range from £46,000 to £61,000.

For that, you get a choice of 3.0-litre V6 petrol and diesel engines, standard four-wheel-drive, eight-speed transmission and an interior that feels a cut above its mainstream rivals. Granted, it can’t match the other cars on this list in terms of opulence and a sense of occasion, but many will appreciate the understated styling. It’s also huge, with seating for five adults and a massive boot.

We said: ‘When you consider the company it keeps, the Volkswagen Touareg is a bit of a bargain. Many buyers will stretch to the fully loaded R-Line Tech, which boasts a 15-inch touchscreen instead of a button-packed centre console. Combined with a 12-inch digital dashboard, it presents a high-definition visual feast.’