Ah, yes, the never-ending battle between two of the finest high-riders out there, the Lamborghini Urus and Jeep Grand Cherokee Trackhawk. One costs an insane amount of money and is more refined, whereas the other proves that you don’t have to be loaded to enjoy such a machine.

The two super SUVs have already met on numerous occasions, proving their worth in multiple straight-line sprints. This time, they were filmed at the Race1000 event in Germany, engaging in a photo-finish, half-mile combat, with one completing the run in 18.24 and the other in 18.34 seconds.

So, which one was quicker? We will get to that in a few moments, as the video lies at the bottom of the page, but before, let’s remind ourselves about the performance and power of the Jeep and Lamborghini, starting with the 0 to 60 mph (0-96 kph) acceleration, which takes an identical 3.5 seconds in both of them.

If you haven’t figured it out yet, we won’t spoil the clip, which is almost 5 minutes long and shows the two high-riders going to war at the 1:35 mark. And that’s not all, because it also reveals a half-mile race between the Lamborghini Urus and the Ferrari 488 Pista, and you know which one was quicker, don’t you? We’ll give you a hint: it was born in Maranello. Subsequently, the Italian SUV was challenged by a bad Audi, yet it had no problem showing it who’s boss. Now would be a good time to hit the play button. 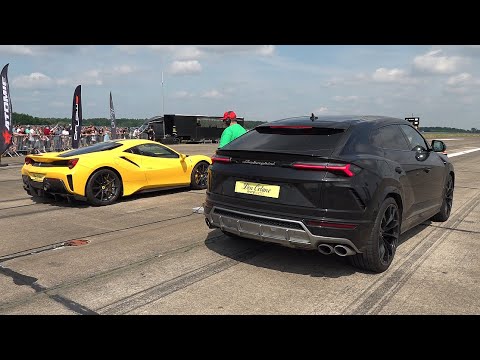