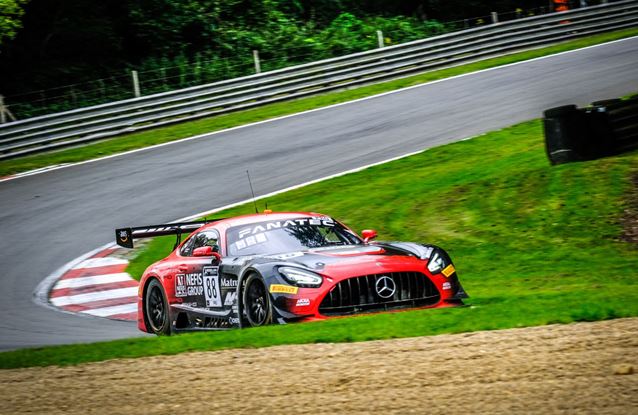 AKKA ASP will start both of tomorrow’s Sprint Cup races at Brands Hatch from pole position after Timur Boguslavskiy and Raffaele Marciello topped their respective qualifying sessions at the British circuit.

Boguslavskiy initially secured second on the grid, 0.064s shy of Ben Barnicoat (#38 JOTA McLaren), before the British driver was demoted two places for impeding rival cars. This promoted the Russian to his first overall pole in the Sprint Cup, one place ahead of title rival Charles Weerts (#32 Team WRT Audi), setting up a high-stakes dash to turn 1 in tomorrow’s opening contest.

Despite his penalty, Barnicoat’s third-place grid slot still matches the best of the season for the #38 McLaren. The Brit will share the second row with Luca Stolz (#6 Mercedes-AMG Team Toksport WRT), who had earlier topped pre-qualifying but could not quite match that performance at the crucial moment.

Ricardo Feller bagged fifth overall and Silver Cup pole with a late flyer in the #14 Emil Frey Racing Lamborghini. Indeed, the Swiss pilot may have climbed even further up the 28-car grid had he not encountered traffic on his best lap. Crucially, however, it was enough to beat class rival Pierre Alexandre Jean in the #108 CMR Bentley by 0.093s.

Miguel Ramos gave Barwell Motorsport pole in Pro-Am with a 1m25.357s at the wheel of the #77 Lamborghini. The experienced Portuguese driver was comfortably the quickest man in his class, circulating seven tenths quicker than the next best Pro-Am runner.

Marciello wasted no time in asserting his dominance in the second qualifying session, posting a 1m23.660s in the #88 Mercedes-AMG shortly before rain began to fall on the British circuit. Though by no means heavy, it seemed to be enough to prevent any improvements, particularly on Marciello’s impressive benchmark.

But that did not stop several teams from trying. While the Italian remained in the pits with crew-mate Boguslavskiy, a flurry of cars headed out on-track for the final minutes of the session. As purple sectors began to appear on the timing screens the tension in the AKKA ASP garage visibly increased.

The first to go close was Dries Vanthoor in the #32 Team WRT Audi, whose 1m23.865s was just a tenth shy of Marciello. Maro Engel then went even faster in the #6 Mercedes-AMG Team Toksport WRT machine, but the German’s lap was 0.091s shy of Marciello’s. After a tense wait, the AKKA ASP squad had pole.

Vanthoor will start third, while Jules Gounon was fourth quickest in the #89 AKKA ASP Mercedes-AMG, 0.003s shy of the #32 Audi. Fifth overall and Silver Cup pole belonged to the #7 Toksport WRT Mercedes-AMG of Oscar Tunjo, who had been second only to Marciello when the rain began to fall. Class rivals Ryuichiro Tomita (#31 Team WRT Audi) and Jim Pla (#87 AKKA ASP Mercedes-AMG) were next on the timing screen.

Henrique Chaves was ninth overall to secure a sweep of Pro-Am poles for the #77 Barwell Motorsport Lamborghini, adding another crucial bonus point to his squad’s title challenge. He was made to sweat by a late charge from Jonny Adam (#188 Garage 59 Aston Martin), but ultimately the Portuguese racer had a little over a tenth in hand over his class rival.

Today’s qualifying sessions set the grid for a pair of 60-minute races, which will take place on a packed Sunday at Brands Hatch. Boguslavskiy will lead the field to the green flag for the opening contest at 11:00, while the second outing will begin with Marciello on pole at 15:45. Live coverage will be broadcast live on the official Fanatec GT World Challenge Europe Powered by AWS website and Facebook pages, as well as the GTWorld and GTWorld Français YouTube channel.

Walkenhorst Motorsport will compete with three established drivers and three new drivers in the cockpits of the two BMW M6 GT3 in the remaining two races of the season in the Endurance Cup, within the FANATEC GT World Challenge Europe, at the Nürburgring (GER, 5th September) and Barcelona (ESP, 10th October).
more >>

Still in contention for title after successful dress rehearsal for Spa

Mercedes-AMG Motorsport enjoyed a rewarding third round of the Sprint Cup in the fiercely contested GT World Challenge Europe series, with two second places at the Misano more >>


At the second round of the Fanatec GT World Challenge Europe Endurance Cup, Team WRT managed an excellent performance in the race after a difficult weekend. Kelvin van der Linde, Dries Vanthoor and Charles more >>

The second endurance race of the season in the Fanatec GT World Challenge Europe powered by AWS took place last weekend. The six-hour, 1000-kilometre race was hosted by the “Circuit Paul Ricard” in Le Castellet (FRA). The Walkenhorst Motorsport more >>

…thanks to a rapid lap from Vincent Abril, who hit the top of the timing screens shortly before sunset. The session began in daylight at 20:40 and concluded 90 minutes later in darkness, with the best times coming around the 21:00 mark. This provided teams and drivers with more >>

Round two in the Endurance Cup of the GT World Challenge Europe: The next race for HRT is set to take place this weekend (28-30 May) at Circuit Paul Ricard. As part of a strong grid featuring 47 cars in total, the team from Meuspath will again field two Mercedes-AMG GT3s.

In the 6-hour race at Circuit Paul Ricard, JP Motorsport will contest the only Fanatec GT World Challenge Europe Endurance event chosen for 2021. Regular drivers Christian Klien and Patryk Krupinski take their places behind the wheel. The trio is completed by Karol Basz.
JP Motorspor more >>

…powered by AWS Endurance Cup   Orange1 FFF Racing Team is ready to take the challenge ahead of the Circuit Paul Ricard 1000 km, the second round of the 2021 Endurance Cup of the Fanatec GT World Challenge Europe powered by AWS. more >>

Emil Frey Racing is ready for the 1000km race at Paul Ricard, France

Endurance Cup set to stage its second round: •    Emil Frey Racing currently third in overall ranking•    Norbert Siedler back at the wheel of #163 •    Rougier more >>


After Charles Weerts, at 20 years of age the youngest Audi Spo more >>

SPS automotive performance enjoyed a successful start to this season’s Sprint Cup in the GT World Challenge Europe, with two podiums in the Pro-Am class at Circuit de Nevers Magny-Cours. In an eventful second race, the Willsbach-based team missed out on class victory in the highly-competitive SRO series by mere tenths of a second. more >>

Mercedes-AMG Motorsport has got the Sprint Cup season in the Fanatec GT World Challenge Europe Powered by AWS off to a successful start. Maro Engel (GER) and Luca Stolz (GER) won the second race of the weekend at Circuit de Nevers Magny-Cours with the #6 Mercedes-AMG GT3 of the Mercedes-AMG Team Toksport WRT.
more >>

An impressive fightback saw Mercedes-AMG Team HRT (#4) lead the high-quality GT3 field at Autodromo Nazionale Monza, before a puncture dashed any hopes of a top result. In the end, the team had to settle for 13th place. The number 5 car fought hard and was on course for a podium finish in the Silver Cup, but eventually had to settle for 22nd place overall more >>

The Mercedes-AMG Motorsport Customer Racing Teams got the new season of the Fanatec GT World Challenge Europe Powered by AWS off to a successful start. In the opening race at the Autodromo Nazionale Monza, Raffaele Marciello (ITA), Daniel Juncadella (ESP) and Jules Gounon (FRA) finished second overall with the #88 Mercedes-AMG Team AKKA ASP entry. In the Silver Cup, the more >>