In 1992 McLaren, then only a race team with seven F1 constructors’ titles to its name, unleashed the F1 road car on the world, changing the supercar game forever. Nearly two decades later, in 2011, having not even thought about building another production car in the intervening years, McLaren Automotive dropped the MP4-12C cat among the established supercar pigeons. Now, another 10 years on, a third chapter is being written into the Book of Woking with the Artura.

Visually, it is all McLaren; sharing the almost predatory, bodywork styling that favours function over form – similar to the 720S. Underneath that skin it is all change, even down to the infotainment system. New chassis, new engine, new gearbox, new electric motors. The Artura re-establishes McLaren’s ethos and spirit for a new, electrified, era.

Every McLaren since the MP4-12C has been powered by a 3.8- or 4.0-litre twin-turbo V8, which itself is based on Nissan’s VRH design used in various motorsport applications in the ’90s. The Artura brings Woking’s engines into the 21st century, with a unique 120-degree V6 developed by Ricardo. Revving to 8500rpm, the 3.0-litre capacity unit is 40kg lighter than the V8 it replaces, and 150mm shorter, while introducing new-to-McLaren tech like direct injection and petrol particulate filters. Burning hydrocarbons alone it produces 430kW and 585Nm, though a 7.4kWh battery placed beneath the fuel tank sends 70kW and 135Nm through an e-motor within a new eight-speed dual-clutch transmission for a total system output of 500kW and 720Nm.

Don’t expect to see a non-hybrid version of the new engine any time soon either (save perhaps in GT racing versions), with Artura chief engineer Geoff Grose telling MOTOR “our intention is for this to be an integrated powertrain, it is not a bolt-on thing, it is built in harmony. Our turbo size for example, is based on the fact that we are going to fill in loads of torque with the e-motor.” 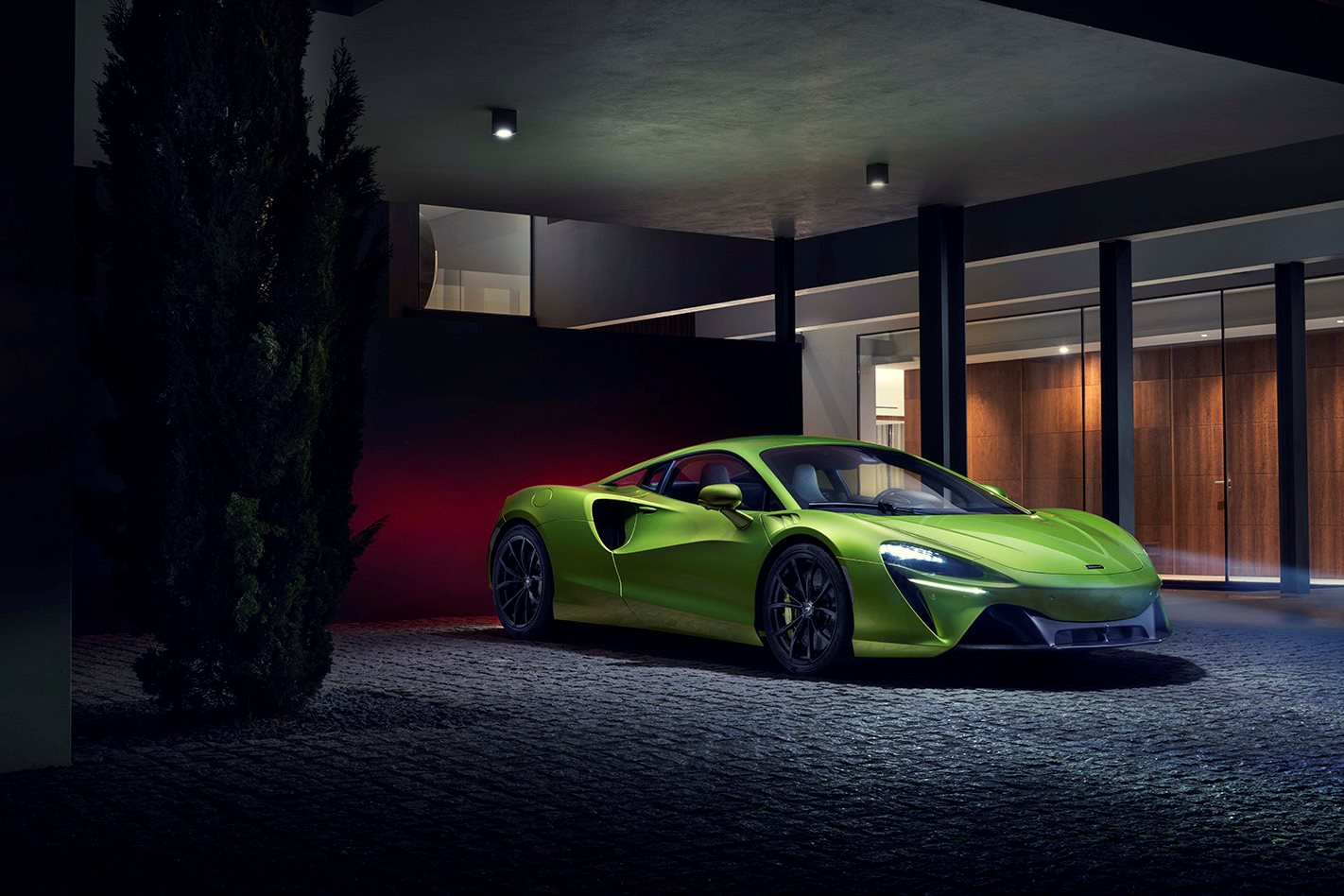 A simplistic view of the Artura’s place within McLaren’s established family tree marks it as a replacement of the 570S. That isn’t the case. The Artura treads its own path, with a higher level of performance. As a result, the Sports Series model line is now dead, with the Artura sitting alongside the 720S and 765LT, above the GT, and below Ultimate Series models like the Speedtail.

The V6 supercar’s straight-line numbers speak to this; 0-100km/h in 3.0 seconds, 0-200km/h in 8.4sec, and a top speed of 330km/h. That’s Porsche 911 Turbo S levels of performance, and Woking wants this to be the starting point for the Artura line. Everything going forward from this point will be faster still.

The hybrid powertrain allows the Artura to travel up to 30km on battery power alone – a figure that McLaren decided on after some intense internal discussions according to Chief Operating Officer Dr. Jens Ludmann.

“We looked at customer usage, and what their expectations are on range, and in a plug-in it is relatively small, they don’t expect much,” he tells MOTOR. “Then we looked at global regulations, is there any benefit from having certain ranges.” 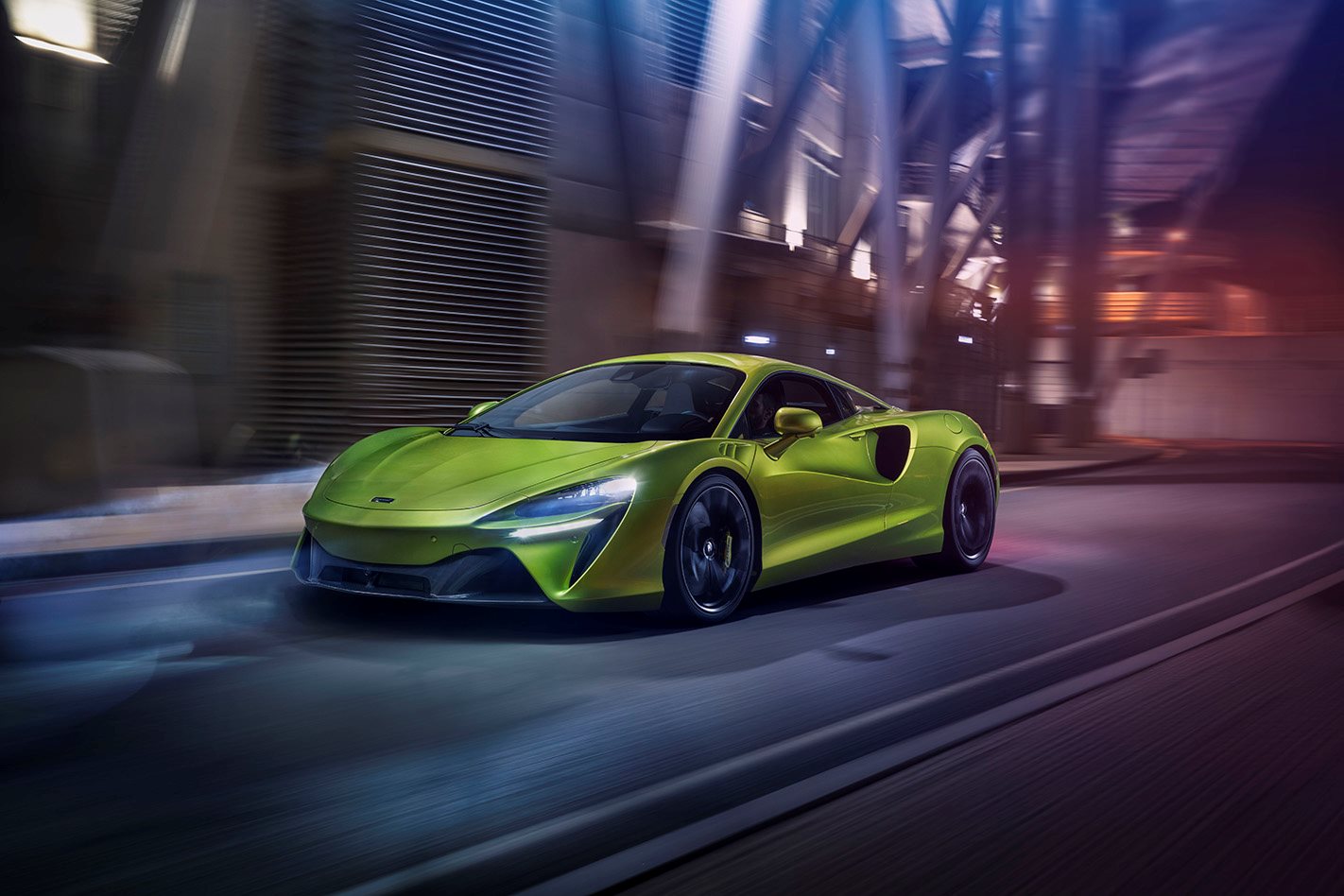 While the Artura isn’t the first hybrid McLaren has produced, it is the first built in serious numbers (by supercar standards), and Ludmann says the company’s technical efforts in that area have improved significantly in just eight years.

“That has a multiple of performance improvement over the McLaren P1, which had a e-motor that weighed 38kg. It is a substantial weight reduction on a single component, and the power density has also improved significantly.”

This leads nicely into the core ethos of the Artura’s development. Despite its on-trend hybrid V6 powertrain, the Artura remains a vanguard for performance purity. Power is still sent exclusively to the rear wheels, the Sports Series’ brilliant hydraulic steering has been retained and McLaren has worked hard at keeping weight gain to an absolute minimum – to the point that its engineers and executives have focused on it above all else. Balance that with the fact that a hybrid powertrain (and its associated extra kilos) is now an absolute necessity to meet emissions regulations and you begin to understand why McLaren has gone to such extreme lengths to save weight. 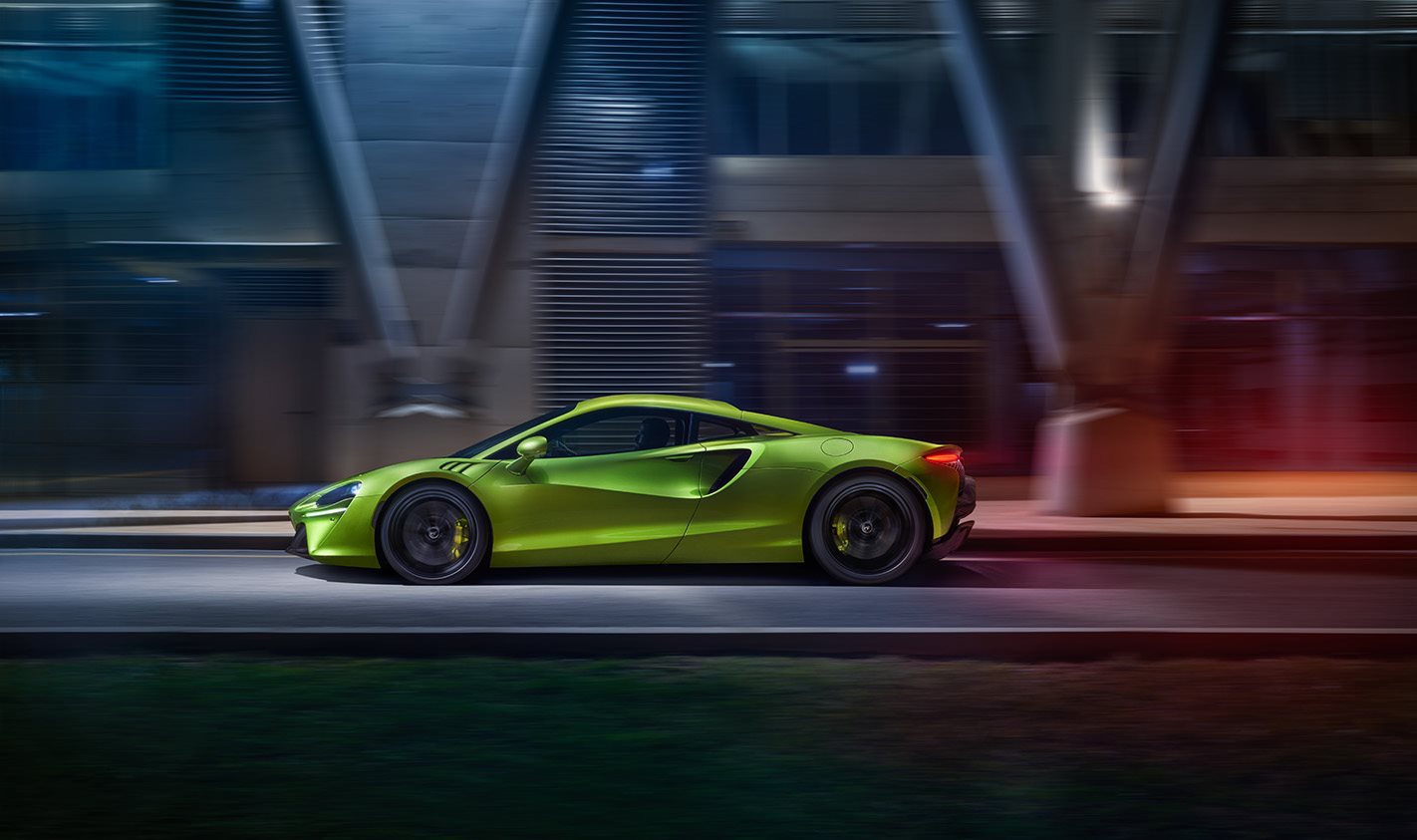 According to Grose, the all-new carbon-fibre structure – named MCLA – is the “heart of our car”, and it is where the core of the lightweight fascination begins. The new design is lighter, stronger and stiffer than the one it replaces, naturally, but it is how it is built that brings the biggest benefit. McLaren’s previous generation carbon tub was designed by Woking, but built by suppliers, whereas this new structure is constructed in the new McLaren Composites Technology Centre in Sheffield before being trucked 280km to the Woking HQ for the entire vehicle’s assembly.

“This has allowed us to be a lot more precise with the design,” Grose explained to MOTOR. “It is still a one-piece moulded part, but we’ve changed the feed in processes, along with the way we lay up the preforms of carbon. Now we are integrating and doing that ourselves and it gives us a lot of potential for optimising further with that structural development.”

MORE What it is like living with a McLaren 570GT

Knowing that almost every new McLaren that will be put into production in the future would be electrified in some way, shape or form allowed the engineers to place core pieces of the hybrid system where they would be best suited, without compromise.

“The battery is right behind the driver on the floor level, the panel that the cells mount to is a carbon structure that is actually part of the monocoque,” Grose adds. “It bolts up and closes off a section, so it contributes to the strength and stiffness of the car.” 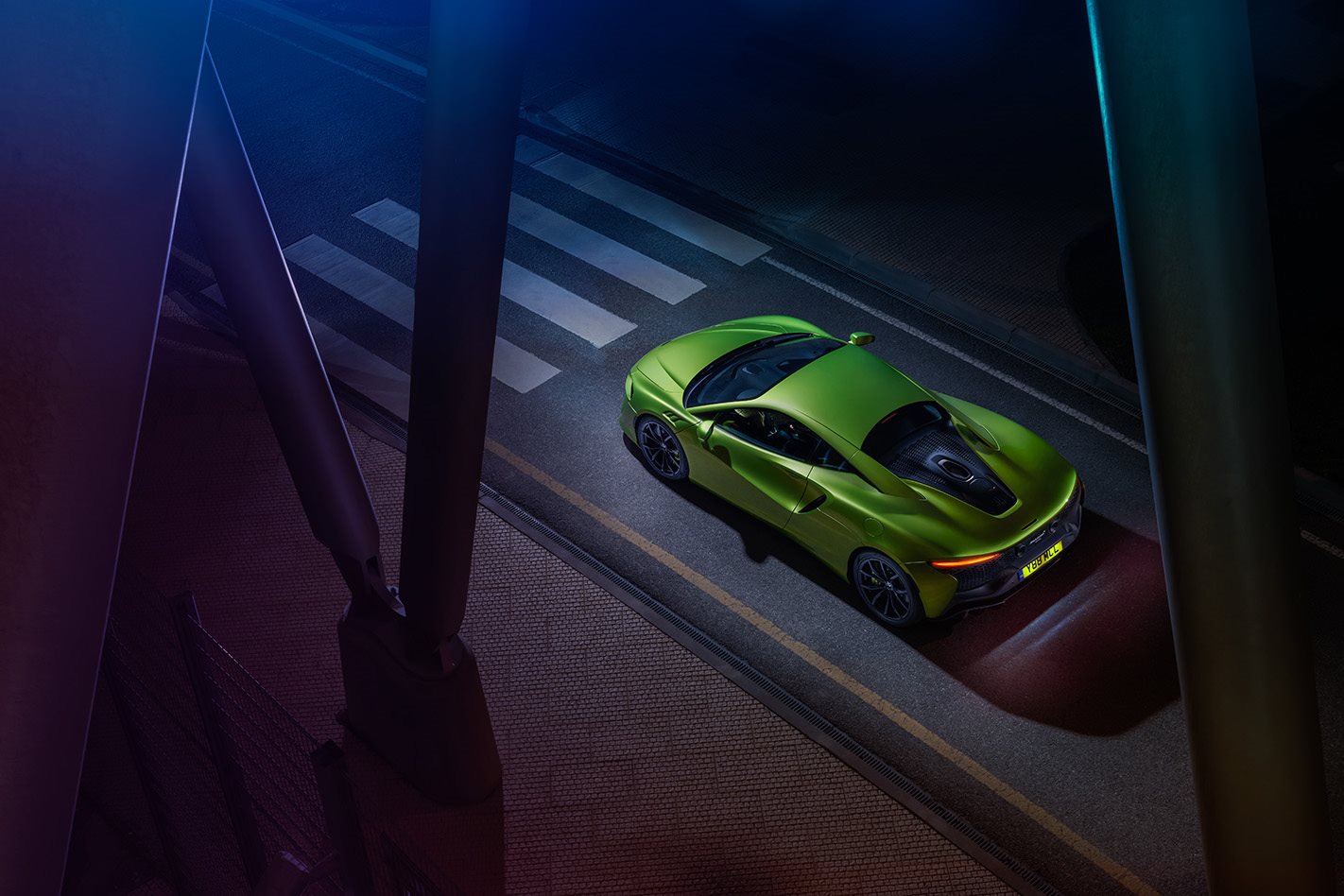 Instead of placing the electric motor on either of the axles, McLaren has slotted it into the middle of the drivetrain between the gearbox and engine, sitting directly on the transmission input shaft inside the bellhousing. As a result the eight-speed dual-clutch doesn’t need a reverse ratio, with the transmission and combustion unit de-clutching as the electric motor spins backward to perform that function. This saves space and, you guessed it, weight.

“All-wheel drive is an option, but we don’t want a heavy hybrid – we want to keep the weight of the car down,” says Grose. “We don’t need four-wheel drive on this car we felt, we know we can deliver the necessary performance from the rear axle, and integrating the e-motor into the drivetrain.”

Space was second on the engineer’s priority list with the Artura. Despite overall length being 10mm longer than the 570S (thank the designers for that), the wheelbase has shortened by 50mm. Everything ahead of the driver was already pushed to its maximum optimisation, so McLaren engineers focused on finding improvements in the back half of the car.

“We fought for every millimetre along that path from the engine to the rear axle,” Grose says. 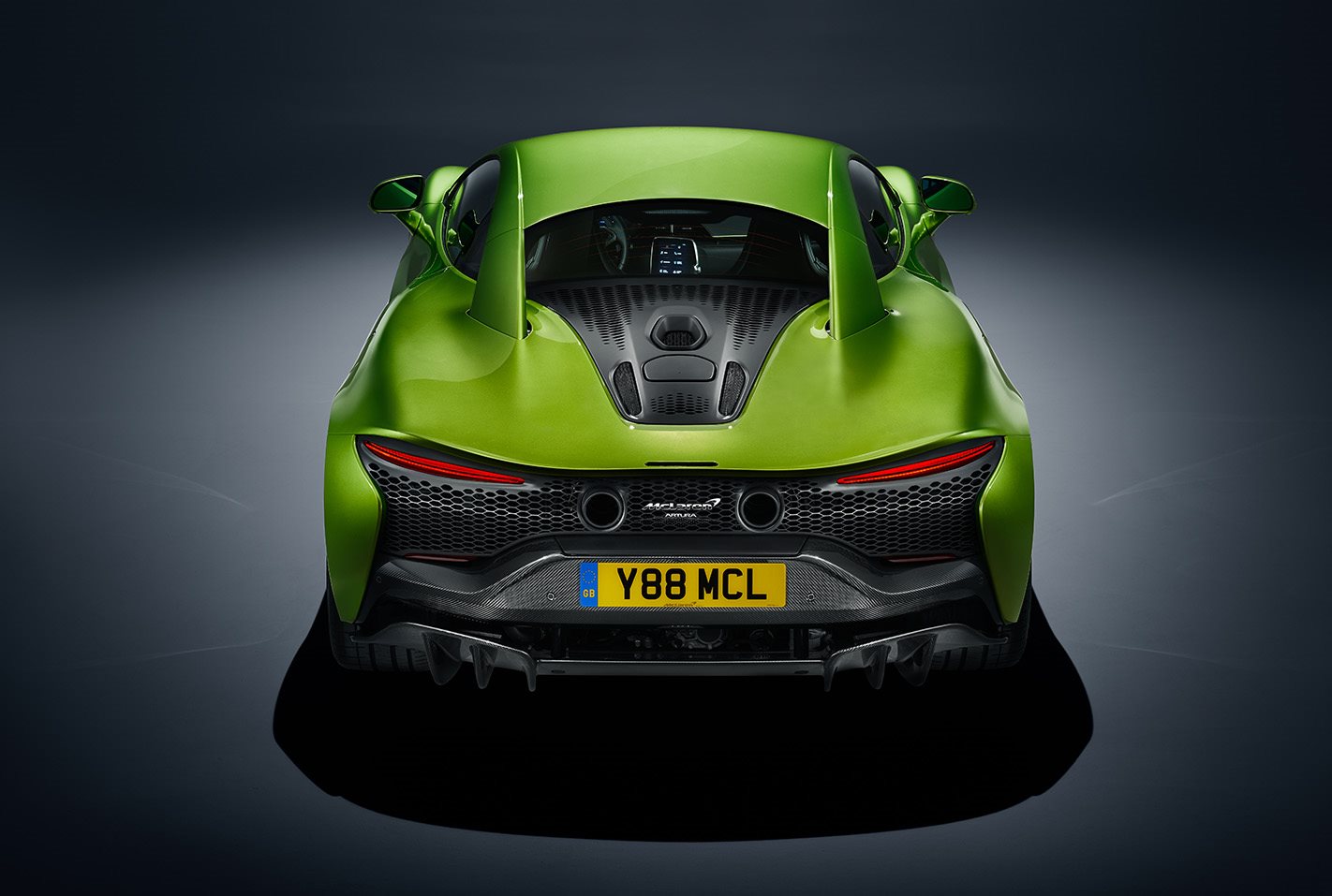 Perhaps surprisingly, finding the optimal vee angle for the new engine was integral in this space-saving endeavour.

“One of the challenges of a narrower design is it pushes the engine height up, and we are trying to keep the engine really low. Going with the 120-degree angle means you can share a crank pin between two opposing cylinders which helps shorten the length of the crankshaft and ultimately the length of the engine,” Grose explains.

“It still needs to be compact enough to fit in the middle of the car, so it can’t be too wide either. We have really squeezed down the gap between the cylinders and pushed in the dimensions from every direction.”

The flow-on effect of the shortened engine is McLaren’s engineers were able to rework the Artura’s rear suspension design to better improve control in high-speed bends.

“The top link is wishbone, while the bottom is now a broken wishbone, it is two separate links to bring the pivot point further outboard,” adds Grose. “We also moved the toe control arm, which was previously at the back of that arrangement, forward so it is anchoring right into the heart of the frame. The control of the toe stiffness of the rear corners is massively increased, but not by adding a load of weight, just changing the way we use the mechanical advantages. We also have a slightly longer lever arm on that toe link.” 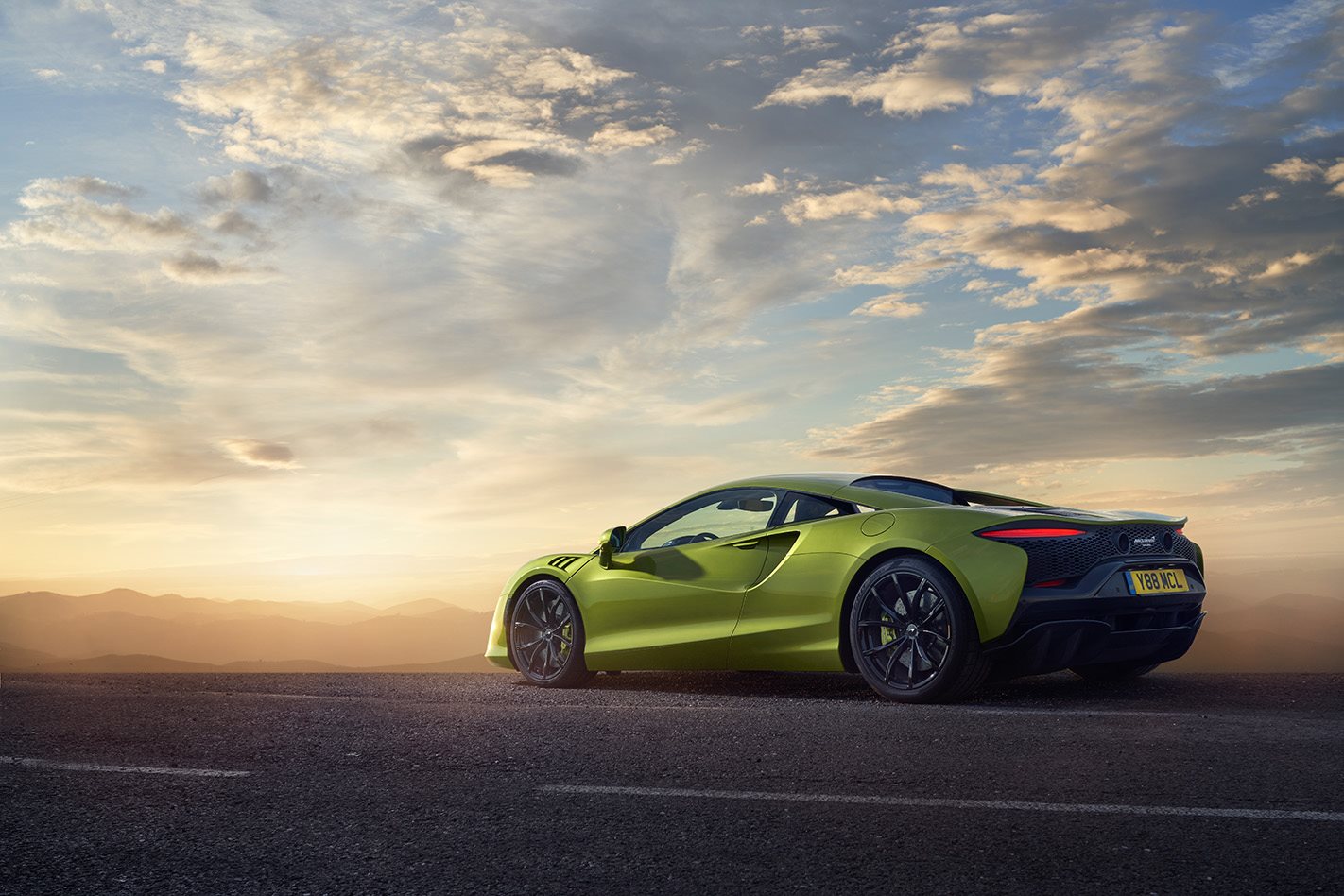 The individual pieces that make up the Artura are just the start. Everything being built from a clean slate has allowed improvements in production efficiency – the entire engine, transmission, intake, and exhaust assembly is installed into car as a single piece. Previously with the M8389T V8 parts of the exhaust were assembled on the production line separate to the engine installation. While that doesn’t necessarily improve the final dynamic product, it speaks to the granular level of detail that McLaren worked at to develop the Artura. Nothing was left untouched in what was less the development of a supercar, but the revitalisation of a company solely dedicated to building thrilling supercars.

If successful, the Artura will allow McLaren to snub its nose at bottom-line boosting SUVs just a little bit longer. 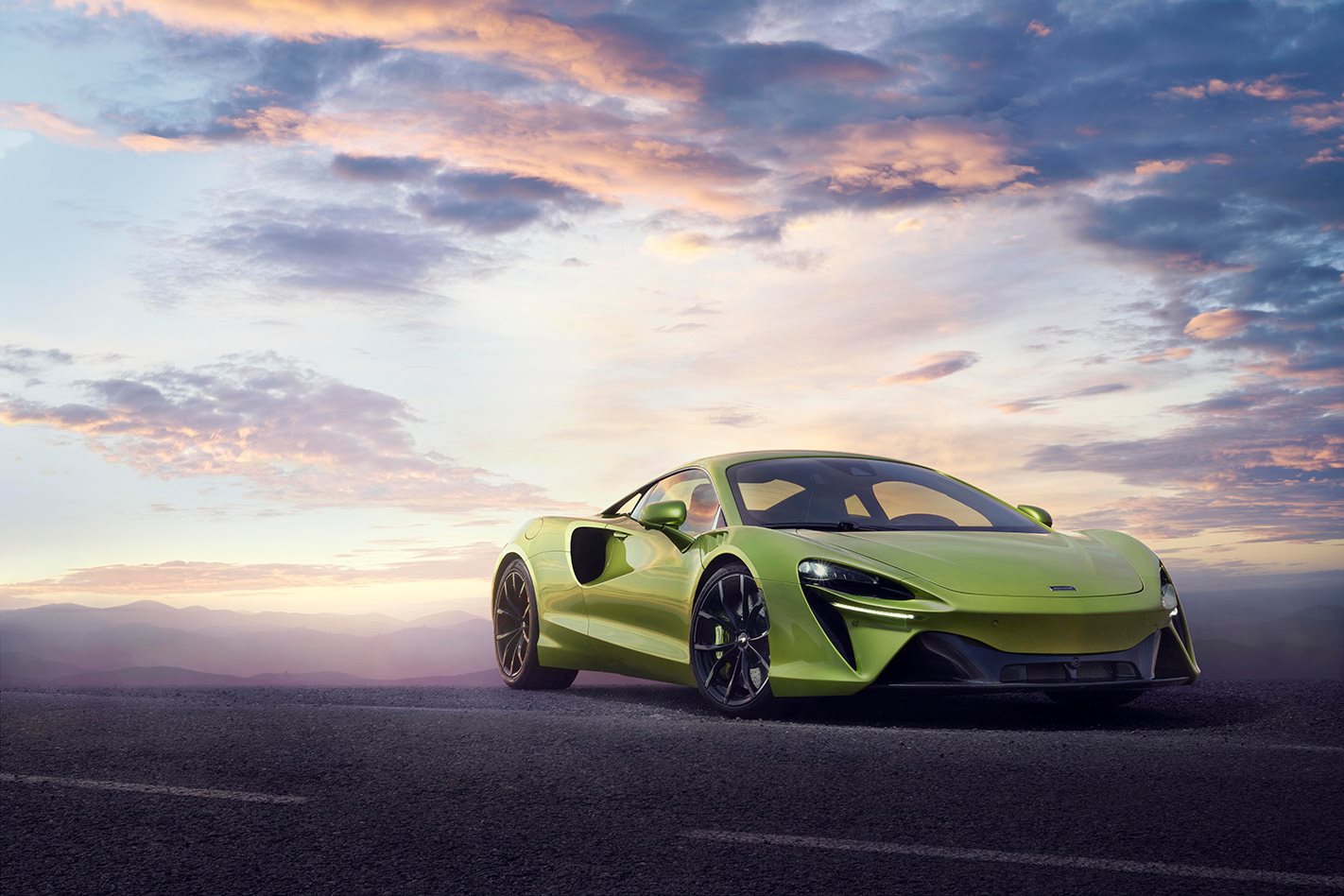