Looks can be deceiving, and under the admittedly familiar ‘shrink-wrapped’ skin of the McLaren Artura, it really is an all-new supercar. McLaren, in fact, quite emphatically enters a new era, with the Artura spearheading a new line of supercars that will be powered by a newly developed, twin-turbo 3.0-litre V6, as well as being underpinned by a new platform, the McLaren Carbon Lightweight Architecture (MCLA), and a motorsport-inspired rear suspension setup consisting of an upper wishbone and lower multi-link system.

But back to the Artura’s basics – combined power outputs are 680 hp and 720 Nm of torque, all going to the rear wheels via a new eight-speed automatic and, for the first time ever in a McLaren, an electronic differential instead of an open diff to improve drive out of corners and reduce understeer. 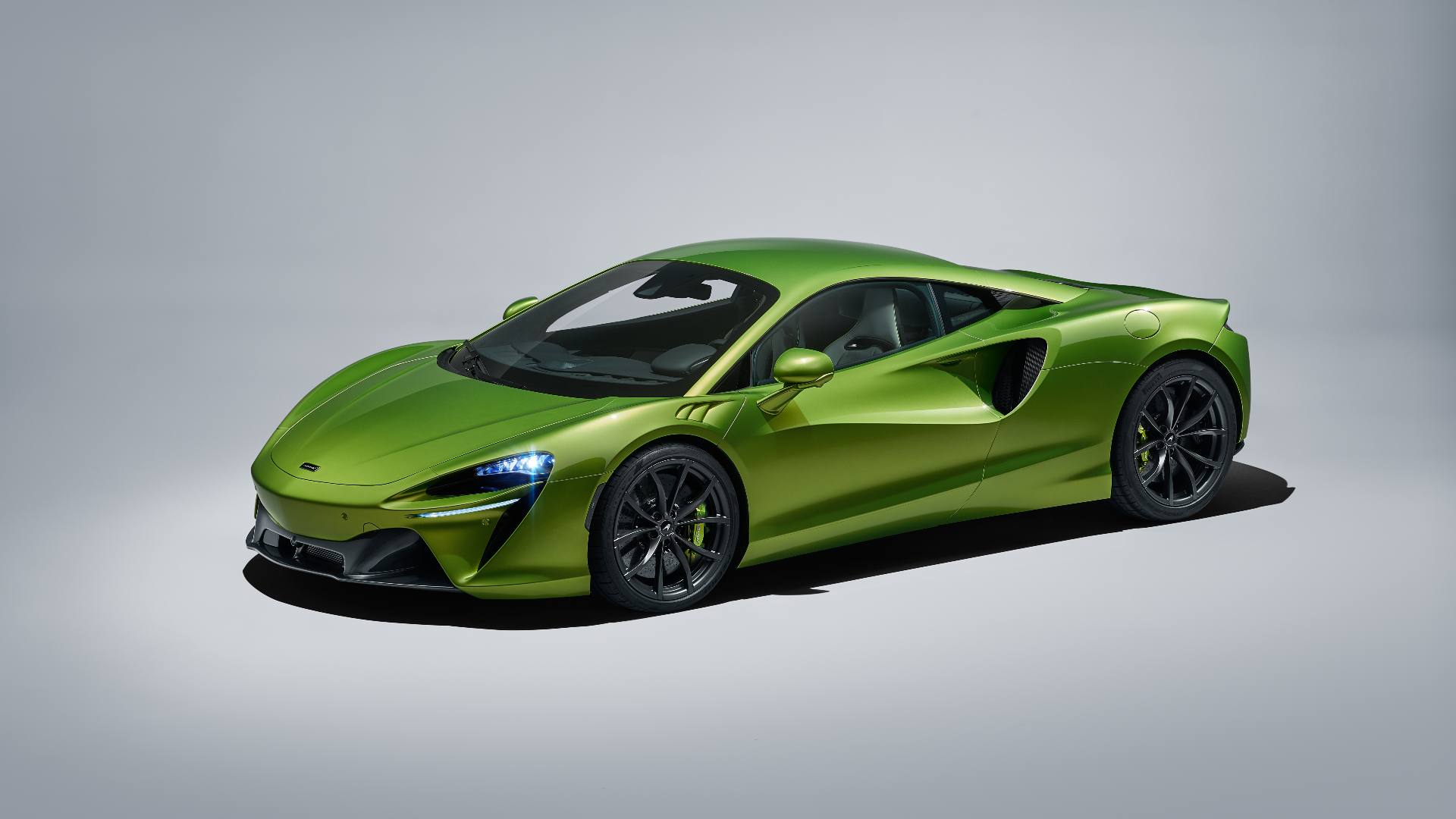 Top speed for the McLaren Artura is rated at 330kph. Image: McLaren

Diving into the specifics of the powertrain, the new 2,993 cc V6 has the two turbos nestled within the 120-degree banks of the cylinders, in the hot ‘vee’, for better throttle response, less lag and a lower centre of gravity. It is also the first McLaren engine to use direct injection, and has been cast using 3D-printed cores, a process that has trickled down from Formula 1. The new engine also weighs just 160 kg, or 50 kilos less than the McLaren V8 that has been used in every McLaren supercar so far. Internal combustion power contributes 585 hp and 585 Nm torque, up to a redline of 8,500 rpm, while the electric motor pitches in with 95 hp and up to 225 Nm, including torque infill. Interestingly, the motor isn’t a radial flux type used in most vehicular applications, it is an axial flux motor integrated wholly into the transmission casing, that yields a more torque dense package. In fact, it is 33 percent more torque-dense than the motor used in the McLaren P1, the company’s first hybrid supercar, but of the non-plug-in variety.

The 8-speed dual clutch transmission is new and is 40mm shorter than the 7-speed gearbox McLaren has been using. It also drops the reverse gear, instead relying on the electric motor running in reverse – the 7.4kWh battery pack holds a minimum charge so that the driver is never stuck without a reverse gear. On electric power alone, the Artura can cover 30 km at speeds of up to 120 kph. It’s the first McLaren plug-in hybrid, and charges up to 80 percent in 2.5 hours, apart from also drawing energy from the ICE under normal driving, depending on the drive mode selected. The modes span an electric-only mode, Comfort where the engine is shut off below 40 kph, and Sport and Track where the motor contributes with torque infill.

Made possible with the new MCLA platform, McLaren also moves to a domain-based ethernet electrical architecture, which reduces cabling by 25 percent, also speeding up data transmission. The Artura also includes ADAS (Advanced Driver Assistance Systems) such as adaptive cruise control, lane departure warning, OTA updates, as well as advanced tyre data analytics made possible by Pirelli’s Cyber Tyre tech, that bundles a chip inside each tyre to feed information about temperatures to the car’s stability control systems. The Pirelli P-Zeros also feature PNCS, a noise-cancellation system that uses a sound-absorbing device fitted to the inner tyre wall to reduce vibration and noise.

McLaren has also made the Artura to be easier to live with, finally including auto headlamps, and improving the cabin layout, relocating the drive mode toggles to the steering column, for example. Even the seats have been patented, with the new Clubsport seat packing a novel adjustment mechanism that moves the entire seat for thigh support, height and backrest movements. Lastly, coming back to the look of the Artura, which is roughly 570S-sized, with deep headlight sockets inspired by the 720S, it follows in the clean, minimalistic McLaren look (with signature dihedral doors, of course), but adds touches like the vented louvres on the fenders to relieve air pressure in the wheel wells, and packs an integrated rear wing that helps optimise aerodynamics.