As the 2021 Formula 1 season begins, it’s worth revisiting Richard Mille’s impressive commitment to the sport. The brand now supports two full Formula 1 teams and four high-profile drivers (with a fifth still convalescing after a horrific accident toward the end of the 2020 season).

These are partnerships as natural as they come: the premise of Richard Mille’s entire brand is built upon the fact that his watches are “racing machines on the wrist.” The tagline reflects Monsieur Mille’s predilection for racing and his love of collecting vintage race cars. Seldom have two fields worked together so well as Richard Mille watches and fast cars. Mille is a well-known racing enthusiast and his (and by extension his company’s) work in motor sport is not simply a pet project or marketing. Richard Mille – the man and the company – lives and breathes cars.

Haas is meanwhile no longer part of the Richard Mille family, but the technical Swiss brand does support the Haas team’s star driver, Mick Schumacher, who is making his Formula 1 debut on the weekend of March 26-28, 2021 with the season’s first race.

Seldom have two brands had so much in common with each other as Richard Mille and McLaren, including forward-thinking, cutting-edge progression in an insanely limited segment of luxury coupled with extreme technology and extreme materials. Hundreds of tiny, seemingly meaningless (but very meaningful) details make up both a world-class complicated wristwatch and a world-class Formula 1 car. Both are about pushing the limits. The first watch to emerge from the Richard Mille/McLaren partnership was the incredibly technical Richard Mille RM 50-03 Tourbillon Split-Seconds Chronograph Ultralight McLaren F1.

“Some people might say that I love cars more than watches. But in my watches, you feel my love for cars anyway,” laughed Richard Mille when I asked about his extensive car collection, which includes several historical McLaren race cars, in 2016. “For me there is no comparison to McLaren anywhere.”

I think if I were able to speak to Mille about this right now he might well backtrack that statement now that his brand has also partnered with Ferrari, a combination that was certainly a long time coming. Back in February 2021, word had already gotten out in automobile circles that Richard Mille had taken over the coveted partnership with Ferrai from Hublot with the official announcement of a multiyear deal following toward the end of the month.

This matchup could well yield an extremely authentic-feeling partnership. And hopefully great watches! “Ferrari and Richard Mille share many common values, from technology to use of similar materials, as well as the passion we put into coming up with and designing our products. Both brands bear the name of their founder and represent their dreams and visions. The partnership will have a wide reach and I am particularly pleased that it also extends to the Ferrari Driver Academy. Richard Mille is a great racing fan and shares our commitment to bringing along talented youngsters and to attract young people to motorsport.” The highest profile of these currently has to be Mick Schumacher, the son of legendary driver and seven-time Formula 1 world champion Michael Schumacher, who makes his debut in Formula 1 in the 2021 season with the Haas team. Michael was a staunch Omega ambassador back in his day, but I would dare say that if Richard Mille had been around in his heyday he might have changed allegiance.

Mick signed with Richard Mille in 2019, the year in which he moved up to the Formula 2 championship with Prema Racing and was announced as a driver for the Ferrari Driver Academy.

This young 21-year-old talent certainly has a big future ahead of him, a future that is certainly made brighter by the coolest possible wristwear. Ferrari driver Charles Leclerc, who was famously a protégé of Jean Todt (a close friend of Mille’s), has been in the Richard Mille family since his karting days. “Since his early days in karting, I have closely followed Charles’ progress,” says Richard Mille. “Noted for his times and his speedy qualifiers, the driver attracted my attention and enthusiasm, immediately convinced the brand must support his budding talent.”

Leclerc joined the Richard Mille family about a decade ago and the Scuderia Ferrari in 2019. He wears a white RM 67-02. 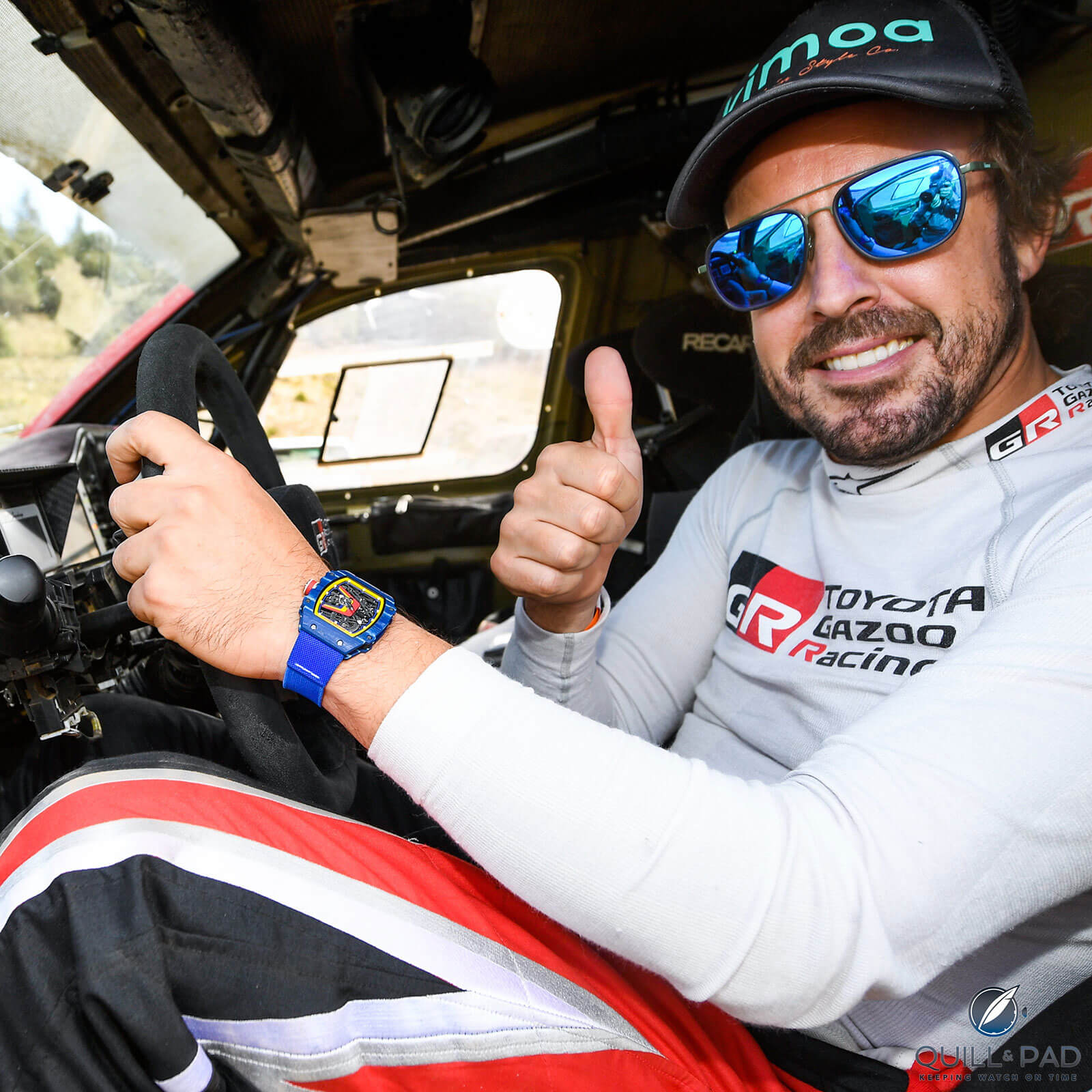 Fernando Alonso is a longtime Richard Mille ambassador, meeting Mille even before joining the McLaren Formula 1 team. In the 2021 season, he races with the Alpine team (formerly Renault), whose watch sponsor is Bell & Ross. Alonso also wears the RM 67-02. Kimi Raikönnen is more of a friend of the brand than an official ambassador. The 41-year-old Iceman, as he’s known in racing circles, is driving with the Alfa Romeo team in 2021, where he arrived in 2019 after leaving Scuderia Ferrari.

In 2019, Richard Mille had also been supporting the Swiss-based Alfa Romeo team for a year, and in honor of Raikönnen’s arrival, the technical Swiss brand introduced the RM 50-04 Manual Winding Tourbillon Split-Seconds Chronograph Kimi Raikönnen, a limited edition of just 30 pieces. Romain Grosjean is a high-profile driver who raced in the Haas team from 2016 until the end of the 2020 season. At the 2020 Bahrain Grand Prix, Grosjean suffered a horrific accident right in the first lap that split his car in half after he crashed into a barrier at high speed. He missed the last two races of the 2020 season and is still recovering from a December 2020 surgery from the injuries. He is not yet back to racing.

You may also enjoy:

You Are There: Visiting McLaren With Richard Mille