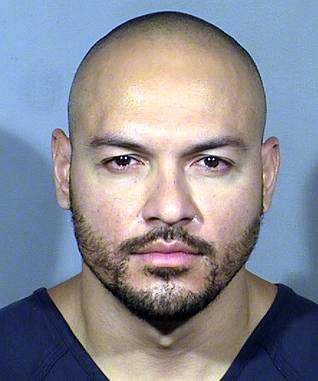 Before it slammed into the back of a moped, instantly killing its passenger, a Lamborghini Huracan was traveling so fast down a Las Vegas roadway that the vehicle he passed before impact “shook,” according to Metro Police.

He’s since posted a $75,000 bond and was released on high-level electronic monitoring, Las Vegas Justice Court records show. Bail conditions include no driving, no drinking, and that he stays out of trouble.

Police allege Rodriguez, from New Braunfels, Texas, had accelerated to 141 miles per hour a couple seconds before impact, which happened at 127 mph, well above the posted speed limit of 45 mph.

The victim, 58-year-old Walter Anderson, died at the scene, police said. The Las Vegas resident was the 58th person killed this year in Metro-patrolled roadways.

In police body camera footage, Rodriguez admitted to driving the Lamborghini, adding that “I killed someone,” according to his arrest report. When asked if he’d been drinking, he responded, “yeah, yeah … nothing crazy,” police said.

Rodriguez’s attorneys, David Chesnoff and Richard Schonfeld, wrote in an emailed statement: “While a complaint was filed, the investigation remains in the infancy stage. We ask that people not rush to judgment and allow the judicial process to take its course.”

A group of friends heading to a party in two Lamborghini cars were driving next to each other when Rodriguez sped up and “left their sight,” the friends told police.

Rodriguez’s 24-year-old passenger, also from Texas, told officers that they were going “pretty fast,” but that she didn’t know Rodriguez had been drinking, police said. She wasn’t injured.

A woman, who was also driving west on Russell, told investigators that a Lamborghini passed her so fast right before the crash that she could feel her vehicle vibrate, police said. She witnessed the crash and called 911.

Metro DUI Strike Team officers who responded to the scene said that Rodriguez’s breath reeked of alcohol and that he had bloodshot eyes, police said. While they were conducting field sobriety tests, Rodriguez said he couldn’t breathe and was taken to University Medical Center, where police obtained two blood samples.

The results weren’t available at the time the arrest report was written.

Rodriguez is next due in court on Sept. 2, logs show.