IF you’re lucky enough to have £300,000 available to spend you could buy any number of things.

You could purchase and four-bedroom house in the north of England, a Sunseeker Predator or a Lamborghini Aventador.

Or, if you really wanted to, you could buy a highly sought-after beach hut on the Mudeford Sandbank.

Hotel room platform Hoo carried out research revealed the staggering figures, and also found that rental prices for huts in Bournemouth and Sandbanks are among the lowest in the UK at just £26.

Hoo co-founder, Adrian Murdock, said: “Beach hut rental prices remain robust and, with another summer of staycations on the cards, they’re likely to climb considerably over the coming months.

“It also seems as though demand for beach huts is pushing up prices as holidaymakers invest in their own piece of beach hut bricks and mortar. A 41 per cent uplift in the last year alone is pretty considerable although, as with any property investment, location is key when it comes to both the price achieved and the property’s rental potential.”

But just why are the beach huts so desirable and so expensive? 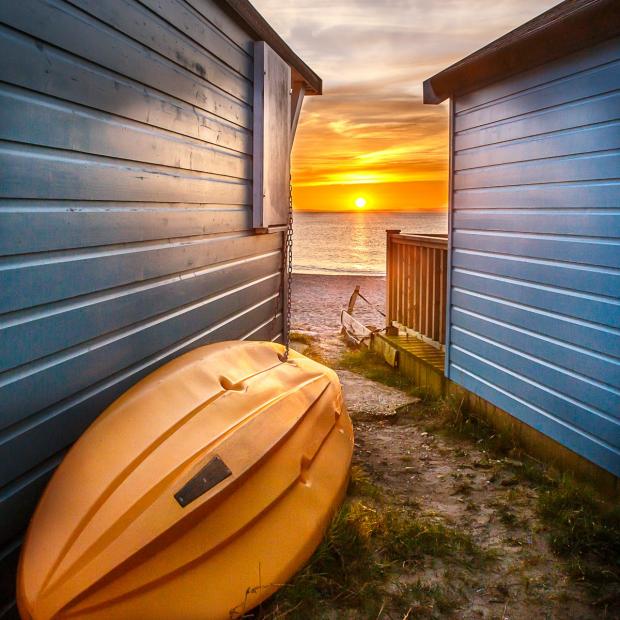 THE LOCATION AND THE HUTS

There are about 360 beach huts at Mudeford, all of which are privately owned.

Cars are banned for the spit, meaning visitors can only reach it by land train, ferry or on foot.

But the exclusivity and the small number of huts only contribute to the cost, it is perhaps the panoramic views which bring the price tag up the most.

A bidding war broke out in July for a beach hut with uninterrupted views of the Isle of Wight.

Four potential buyers put in offers on the 12ft by 10ft hut – two of them without even viewing it.

The huts have no mains electricity or running water and shower facilities are in a shared communal block.

The £330,000 hut is in an ‘excellent’ position on the spit, with uninterrupted views of the Isle of Wight to the front and Christchurch Harbour behind.

It has a small kitchen that has a fridge freezer and a cooker run on Calor gas and hot water from a pump powered by solar panels on the roof.

The front half of the hut has the lounge area that doubles as a bedroom which can sleep four people.

A small set of wooden steps leads to a small sleeping area in the loft space for two more people.

The demand for them has never been greater due to people being put off travelling abroad while the coronavirus pandemic is ongoing.

Andy Denison, of Christchurch-based Denisons estate agents, said: “The demand for the beach huts at Mudeford is the highest I have ever known it right now. It has gone crazy.

“These people are cash buyers from out of the area who want to enjoy the English seaside this year and maybe rent the hut out to other holidaymakers as well.

“It is all down to the increase in staycations.

“People are throwing in the towel on foreign holidays this year, they are very wary of them.

“The cost of flights and hotels is starting to get expensive and people don’t know what it will be like in the resort when they get there in terms of being restricted in hotels and restaurants.”

In February this year, owners of some of the beach huts were shocked to discover their huts had been torched.

Three huts were set alight and 30 were broken into at Hengistbury Head, leaving a repair bill of around £1million.

Two people were arrested for the fire, and owners called for more security on the exclusive spit.

Toby Randall said: “The biggest thing is that us owners pay an awful lot of money to the council in terms of service charge and there’s absolutely no security at all.

“We’re not allowed to come and stay here in the winter months so there’s no one here overnight at all.

“It’s just a sitting target waiting for people. We desperately need council security here to protect what is our favourite place.”

BCP Council member for tourism, leisure and culture, Cllr Mohan Iyengar, said: “We know that this shocking incident has been deeply upsetting for people whose huts were damaged.

“We are working with members of the Mudeford Sandbank Beach Hut Association to discuss their concerns and agree how we take things forward.”

A number of factors have ramped up the price of a beach hut on the Mudeford Spit. Do you think they are worth a staggering £300,000?