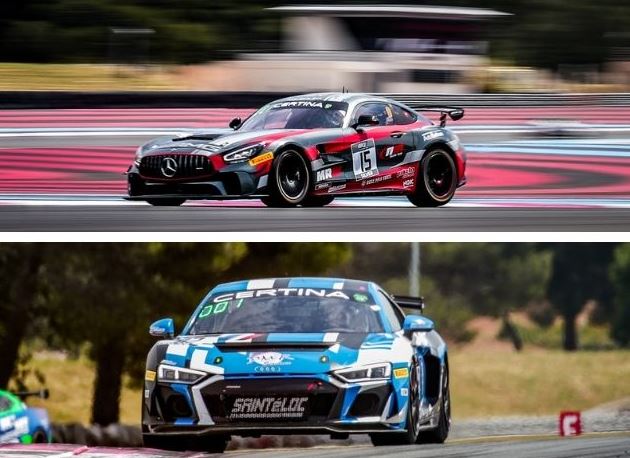 Lluc Ibanez was the fastest driver in the first qualifying session, putting the #15 NM Racing Team Mercedes-AMG on pole position for the opening race. After struggling in Free Practice last year’s winner Ibanez clinched the pole with a fastest time of 2m13.905s.

At the end of Q1 Ibanez was just 0.002s faster than the #8 CMR Toyota of Stephane Lémeret, completing a Silver Cup front row. The #89 AGS Events Aston Martin took third on the grid, with Nicolas Gomar securing the top spot in the Am category. Gomar was briefly shown in overall pole, but his time was deleted for track limits.

The second-fastest lap from Gomar – set one minute before the end of the session – was fast enough to take third. The Frenchman was just 0.040s shy of the #15 NM Racing Team Mercedes-AMG, but 0.186s faster than the #30 CMR Alpine of Vincent Beltoise.

The #88 AKKA ASP Mercedes-AMG and the #42 Saintéloc Racing Audi will start from the third row, with Fabien Michal in the #42 Audi securing the Pro-Am Cup pole for the opening race. The #18 Hella Pagid – racing one Aston Martin and the #69 Team Fullmotorsport Audi were next, resulting in three Am Cup cars in the overall top seven.

Completing the overall top 10 in Q1 were the #17 V8 Racing Chevrolet and the #22 Allied Racing Porsche. 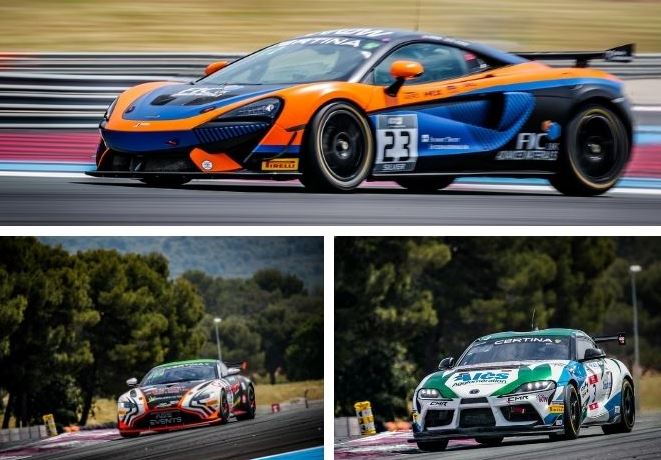 In Q2 it was Saintéloc Racing’s Gregory Guilvert who put the #42 Audi on top spot. Guilvert edged out Monza winner Charlie Fagg in the #23 United Autosports McLaren by just 0.036s to take pole position for the second race.

Guilvert’s first timed lap was not enough to keep Fagg behind, but on his second attempt the Audi driver put in a 2m13.276s. Fagg managed to improve his fastest time, but the championship leader was unable to beat the #42 Audi.
Jim Pla qualified the #87 AKKA ASP Mercedes-AMG on the second row, where he is joined by Antoine Potty in the #8 CMR Toyota. Pla and Potty qualified second in Pro-Am and Silver respectively.

The third-placed cars in Pro-Am and Silver Cup will start the second race of the weekend from the third row, with CD Sport’s Hugo Chevalier qualifying the #2 Mercedes-AMG in fifth and Xavier Lloveras putting the #15 NM Racing Team Mercedes-AMG in sixth.


Italian team to compete in the second round with two Mercedes-AMGs for Guerra-Vullo and Caroline-D’AuriaSecond round of 2021 season for Trivellato Racing by Villorba Corse at Le Castellet. The Italian team is back in action in the GT4 European more >>


Antoine Potty gave himself a nice present for his 18th birthday: at the Autodromo Nazionale di Monza, the young driver from Hamoir and his team mate Stéphane Lémeret finished the two opening races of the GT4 European Series in second place. The Belgian duo thus confirm that they are among the candidates for the title!
more >>


In the GT4 European Series as the highest-ranking continental GT4 racing series, the Audi R8 LMS GT4 competed in a field of 46 entrants at the season opener at Monza.


In the second race, the Saintéloc Racing team with Gregory Guilvert/Fabien Michal more >>


United Autosports’ Charlie Fagg and Bailey Voisin claimed an impressive victory in the team’s maiden GT4 European Series race at Monza. The #23 McLaren came out on top in a drama-filled season opener. The British team opted to bring Voi more >>


Racing One – Ready for Take-Off in Monza


Finally the Season 2021 is starting with the GT4 European Series at the Italien Autodromo Nazionale Monza. Hella Pagid – racing one returns to this Championship with a two car entry. In 2018 they took the Team-Titel as well as the Driver Title Pro-Am. So for the upcoming season there will be huge expectations. more >>


The Italian team is set to return to compete in international racing partnering Villorba CorseTrivellato Racing and Villorba Corse strengthen their partnership and launch a new motorsport challenge for the 2021 season. The Ita more >>


Having been forced to put the 2020 season on hold due to the coronavirus pandemic, the Street-Art Racing team will be back in the GT4 European Series in 2021.


Am Cup champion in 2019, Pascal Bachmann remains loyal to the Belgian team. The 54-year-old Swis more >>


Meloni/Tresoldi duo rejoins Championship with high expectations in the AM class          W&D Racing Team makes its return to the international scenario. After a 2020 season spent in the Italian GT Sprint – when Pao more >>


The Borusan Otomotiv Motorsport team picked up further podiums at the season finale of the GT4 European Series at Le Castellet (FRA).


In the Pro-Am class, Cem Bölükbasi and Yagiz Gedik (both TUR) finished second on the podium more >>


The GT4 European Series drivers’ and teams’ titles were all decided at Circuit Paul Ricard this weekend during the final round of the 2020 season. Silver Cup, Am Cup and the teams’ title went to AGS Events, with Allied-Racing winning the Pro-Am Cup this season. NM Racing Team concluded the season with a double victory in France.  more >>


After five rounds in Italy, the Netherlands, Germany and Belgium the GT4 European Series will conclude in France this weekend. The final of the 2020 season will take place at the 5.822 km Circuit Paul Ricard and the Silver Cup, Pro-Am Cup and teams’ titles are still to be decided in Le Castellet.   more >>


Entries are now being officially accepted for the 2021 GT4 European Series, with ‘early bird’ pricing available through to January 31. The 2020 GT4 European Series will only conclude at Circuit Paul Ricard on November 14-15, but in order to allow more >>


CMR secured the first outright victory for the Toyota GR Supra GT4 in the GT4 European Series at Spa-Francorchamps. Stéphane Lémeret and Gael Castelli were victorious in the second and final race of the weekend. In its tenth rac more >>


Valentin Hasse-Clot and Theo Nouet moved closer to winning the GT4 European Series Silver Cup with a commanding victory in the first race at Spa-Francorchamps. Rain in the Belgian Ardennes meant that the race started under safety car conditions, bu more >>


The GT4 European Series heads to Belgium this weekend for the fifth and penultimate round of 2020 at the Spa-Francorchamps circuit. The first titles of the season could be decided at the legendary 7.004 km racing venue in the Ardennes. All eyes will be on more >>


The race weekend of the GT4 European Series in Zandvoort turned into an absolute worst-case scenario for the RN Vision STS Racing Team. Technical problems, racing bad luck and a balance of performance that made the BMW an inferior racing vehicle thwarted the Mönchengladbacher’s plans.
more >>


Bastian Buus and Jan Kasperlik scored their sixth class win of the season and the third consecutive overall victory at the Zandvoort circuit in the Netherlands for the Allied Racing Porsche team. The Toyota GR Supra GT4 took its first class win in the GT4 European Series in the hands of Gael Castelli and Stéphane Lémeret (CMR), with Selleslagh Racing Teams’s Bob Herber taking the more >>


The British-based team will return to GT racing in 2021, six years since they last raced in a GT series. Team owners Zak Brown and Richard Dean have made no secret of their desire to return to GT racing, and recently confirmed their acquisition of the assets from the Strakka Racing team, which included their premises at Silverstone.   more >>


The GT4 European Series is back in action this weekend at Zandvoort for round four of the 2020 season. Two one-hour races will kick off the second half of the season on the recently renovated Dutch venue.  more >>