FRANKFURT, Germany/TOKYO — While other automakers race to field electrified vehicles, Porsche looks to develop a fuel that will keep its iconic gasoline-burning cars relevant in the decarbonization era.

Porsche’s eFuel, which is under development, combines “green hydrogen” generated by renewable energy with carbon dioxide captured from the atmosphere. The methanol produced from the process is converted into gasoline.

Porsche will start producing the fuel on a pilot basis at a factory it is building in Chile with Siemens Energy, the German firm that produces water electrolysis equipment, and other partners. The plant received an initial investment of 20 million euros ($24.1 million). About 130,000 liters will be produced next year, with plans to lift annual output to 550 million liters by 2026 — enough for 1 million vehicles.

The fuel will be offered to those who bought Porsche’s 911 sports car, among other customers. The gas could be sold directly at dealerships.

Sales of the 911 sports car last year came to 34,000 vehicles, less than the numbers garnered by Porsche’s sport utility vehicles. But the 911 is a main profit driver for Porsche, with a margin estimated at 50%. Porsche’s eFuel would cut carbon dioxide emissions by the sports car, eliminating the risk that it will be scrapped in favor of electrics. 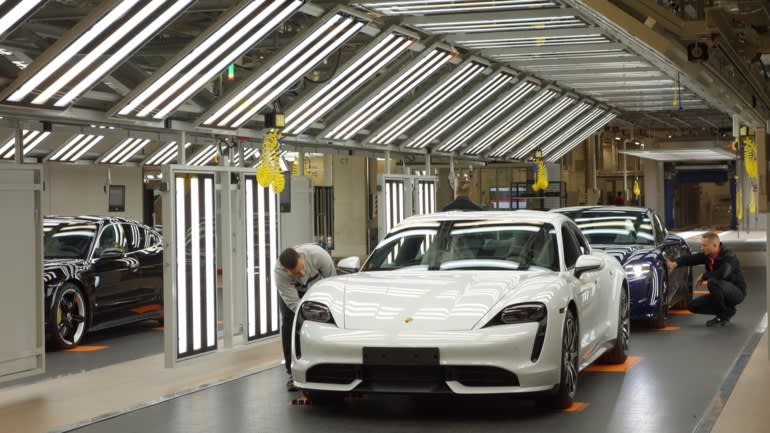 “We do not know how fast on a worldwide basis” the transition will come from conventional plug-ins or hybrids to fully electrified vehicles, Steiner said.

But major obstacles remain for the fuel, including cost.

Porsche expects that producing eFuel will take $10 per liter in 2022. The figure could drop to around $2 per liter when mass production begins in 2026 or 2027, Steiner said, making the fuel competitive against its alternatives. Still, after accounting for taxes and transportation costs, its use likely will be limited to select models and customers.

Another problem involves energy loss. The manufacturing process involves producing hydrogen and then turning it into fuel, which means that the cars likely will have one-sixth the energy efficiency of conventional electric vehicles.

To offset this issue, Porsche chose to locate the plant in the Patagonia region of Chile, where strong winds throughout the year can provide green electricity.

Porsche sees commercializing the fuel as key to preserving its gasoline-powered autos while it makes inroads in EVs. The automaker debuted the electric Taycan sedan in 2020, selling over 20,000 units a year.

The automaker also will launch electric versions of its Macan and Cayenne SUVs as well as the Panamera sedan over the coming years. Porsche plans for 80% of new cars it sells to be electric by 2030.

Other automakers are also exploring new, greener fuels as an alternative to EVs. Mazda’s European arm in February said that it joined an alliance of companies to promote the use of environmentally friendly fuels. The Japan Automobile Manufacturers Association looks to promote the use of carbon-free synthetic fuels in partnership with Toyota Motor and other industry players.