There’s a new coachbuilder out there, and the company calls itself Radford. Today, Radford revealed its first car — the Type 62-2 — and it’s based on the chassis and underpinnings of the Lotus Evora. That’s an extremely good place to begin building from. Plus, the company has some big names attached to it. F1 racer Jenson Button is the one who dialed in the car’s driving dynamics. Mark Stubbs, formerly of Bentley, Bugatti, Aston Martin and more, led the design process. And Ant Anstead, now co-hosting “Wheeler Dealers,” is handling the build/production work.

There may be an Evora underneath all the new bodywork, but this vehicle doesn’t look like one on the outside. Instead, it’s meant to take after the original Lotus Type 62 race car. Take one quick look at both, and it appears as though Radford has done a standup job of getting it there. It’s even been revealed initially in livery worn by the old Type 62. We’ll note that there will be two cars with slightly different looks. The first is a “Classic” version without a wing and fitted with staggered 17/18-inch wheels. The other model is called “Gold Leaf,” and it has the Type 62’s wings, can be done in the livery you see here and features larger center-locking 18/19-inch wheels.

Thanks to the aluminum-intensive structure of the Evora, the Radford Type 62-2 weighs just under 2,205 pounds. Radford saved additional weight by using all carbon fiber body panels. This lightweight body is propelled forward via the 3.5-liter Toyota-provided supercharged V6 used in the Evora. Its base tune in the Type 62-2 offers up 430 horsepower. However, upgrading from the Classic to the Gold Leaf brings an increase to 500 horsepower. Radford says it gets the extra power via upgraded pistons, connecting rods, camshafts and new electronic engine mapping. If you want the extra power in the Classic, Radford says you can still optionally have it. 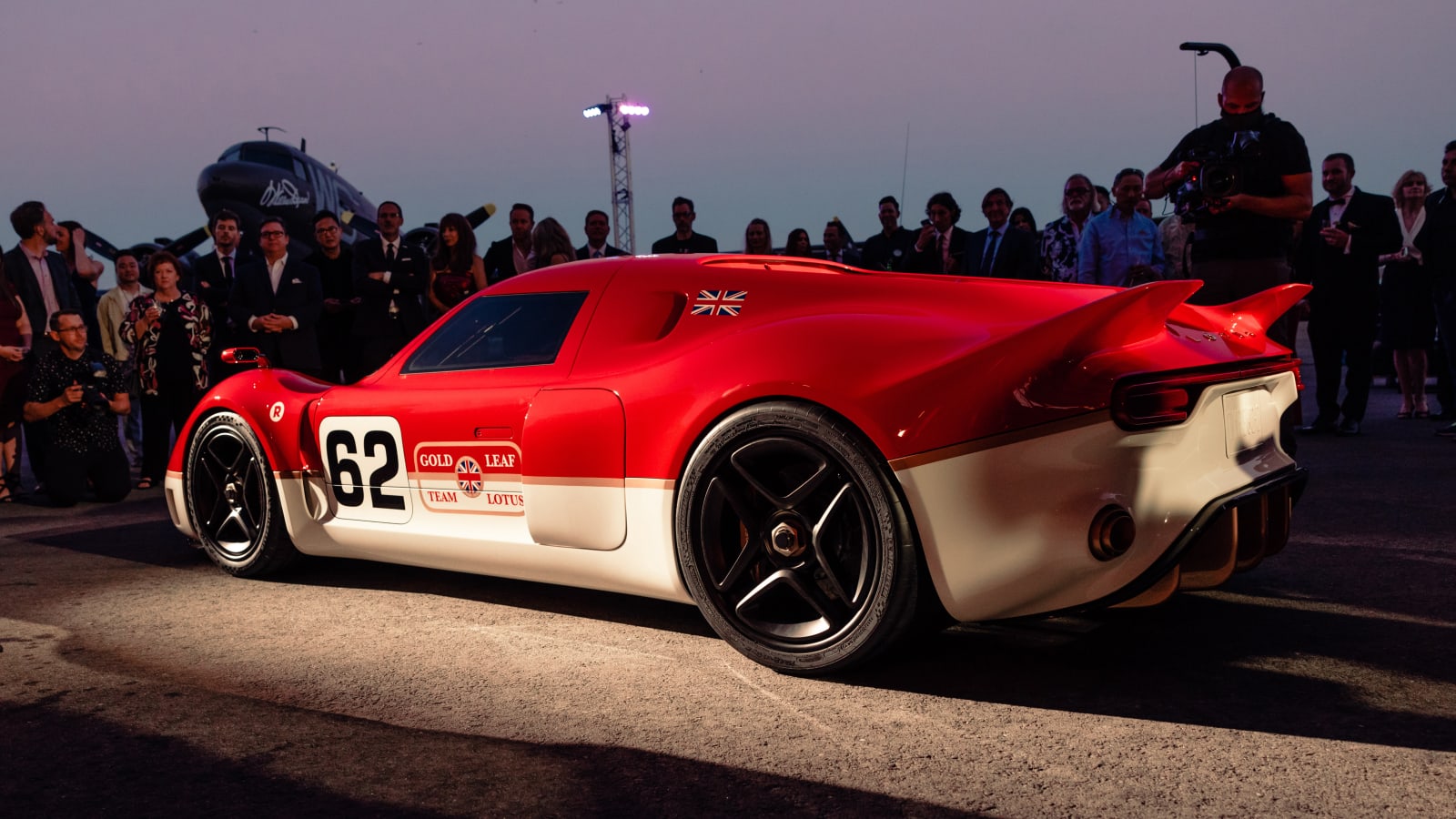 As you may already suspect, a six-speed manual transmission is available on the Type 62-2. Unlike the Evora, though, you can also spec a seven-speed dual-clutch automatic transmission. It’s the only transmission available if you spec the engine up to 500 horsepower, so pick your poison on that front — there’s no manual available for the high-power version.

As for the suspension, Radford says it’s lowered the car more and changed the suspension geometry a bit compared to the standard Lotus design — thanks, Jenson. It uses adjustable dampers and features an optional hydraulic nose-lift system. For maximum steering feel, Radford says it fitted a completely unassisted (not power) steering system.

There are currently no photos of the interior, but Radford provides a brief preview on what to expect. Due to the car’s lack of a rear window, it’s fitted with a digital rearview mirror that provides a constant live feed via a camera pointing backwards. The side mirrors are cameras, too, with the live feed playing on small screens mounted to each A-pillar. This car’s last screen is a six-inch display mounted right in front of the driver that can be customized for daily driving duties or for track data. The car also has Bluetooth audio functionality and a five-speaker audio system.

Radford touts easy ingress and egress due to the door design that sees the door panel stretch all the way into the roof like the original Type 62. There’s a tiny luggage compartment in the rear, and Radford is offering bespoke luggage that perfectly fits into the small space. Because this is a coachbuilt car, every owner will have the ability to spec it exactly how they desire. There will only be 62 ever built, and the first deliveries are scheduled to take place in the first quarter of 2022. Pricing is yet to be revealed.