Rexal FFF Racing Team enriches its racing schedule for the 2021 season lining up one car in the Italian GT Championship. The Chinese squad will contest the Misano Sprint series round on 5-6 June, fielding a Huracán Super Trofeo Evo for Luciano Privitelio. The Italian gentleman driver is going to compete in the GT Cup class, tailored for different one-make models. 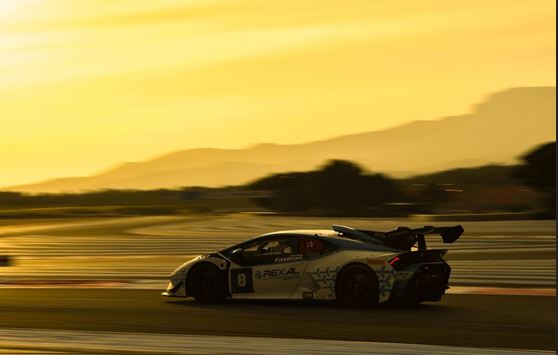 Privitelio and Rexal FFF Racing Team chose this one-off participation to gain mileage and experience in advance of the remaining part of  the Lamborghini Super Trofeo Europe, this year’s main commitment with the crew composed by Luciano himself and his son Donovan. Most of all, Misano circuit is also featured in the Lamborghini one-make trophy calendar as the final venue, on 28-29 October, and it will host the World Finals on 30-31 October.

Luciano will also rely as usual on the precious knowledge of Vitantonio Liuzzi. The former Formula One driver, who counts 80 Grand Prix starts in his career and competed in other top motorsport categories, will be present as a coach driver giving his feedback and suggestions to optimize driving style and car setup.

Track activity will begin on Friday with two 45-minutes free practice sessions, at 11:05 and 15:55 respectively. On Saturday morning there will be two qualifying sessions, at 10:20 and 10:45, while race 1 will start at 18:20 with a 50-minutes duration plus one lap. Race 2 will complete the program on Sunday with the same format and a 15:10 start.

Both races will be aired live on TV through Rai Sport (57 and 58 Italian DTT channels) and ACI Sport TV (Sky 228 channel). A live streaming service is also available on the acisport.it official website, YouTube, Facebook and Motorsport.tv. 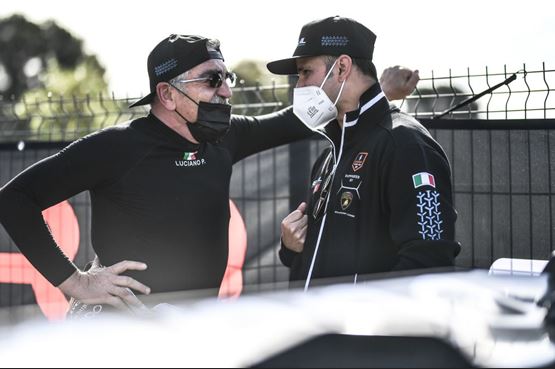 “We’re always eager to add a racing weekend in our schedule, this time to measure ourselves in the highly-competitive Italian GT Championship.

We arranged this participation in Misano to have a further chance of growth with Luciano, working together to prepare the Lamborghini Super Trofeo Europe round in Misano and, obviously, the remainder of the season. Having this target in mind, counting on a big profile as Vitantonio in the coach driver role is going to be a huge plus”.


Tie at the halfway point


With a victory in the second round of the North Island Endurance Series, the two Audi privateer drivers Neil Foster and Jonny Reid are creating suspense in the title fight in New Zealand. Gentlem more >>


Mirco van Nostrum/Álvaro Fontes clinched a podium result at the start of the Campeonato de España Resistencia. The Dutch-Spanish driver duo from the Circuito Do Sol team finished second in the TCR class in the Audi RS 3 LMS in the first more >>


The 2021 season in the BMW M2 CS Racing Cup Benelux began with two events in May, providing thrilling racing action with some intensive duels. Three races took place on each weekend: two 30-minute races and a 55-minute race with a mandatory pit stop. The s more >>


The Japanese Super Taikyu race series visited Fuji (JPN) from 21st to 23rd May and the 24-hour race at the circuit near Tokyo (JPN) proved to be extremely successful for BMW Team Studie. In the ST-Z class the #20 BMW M4 GT4 from SS/YZ Racing with St more >>


The first sprint races of the season in the Italian GT Championship had taken place in early May, and three weeks later BMW Team Italia was in Pergusa (ITA) to compete in the first endurance race of the year. The regular drivers in the #7 BMW M6 GT3, Stefano Co more >>


Riccardo Agostini is king of lake in the Italian GT Endurance


Imperiale Racing third at the end of the first round of the Italian GT Endurance 2021 Championship that has been run at the Circuit of Pergusa, Sicily, last weekend.The Mirandola-based team has been among the front runners with the Lamborghini Huracàn G more >>


Leipert Motorsport from Wegberg scored a strong third place in the 24h Series at Hockenheim on its official GT3 comeback this weekend.Also the start into the European season in mid-April could hardly have been better. As a result, they are now in second place in the overall- and team standings in the Lamborghini Super Trofeo as well as in the ADAC GT4 Ge more >>


Podium start to Italian GT Championship for Middleton at Pergusa


• At old-style Pergusa, an early race mishap that sidelined Basz/Postiglione/Salaquarda car, did not stop come-from-behind win by stubborn trio Agostini/Drudi/Ferrari Across three decades of domestic motorsport activities Audi Sport Italia had no more >>


Following a successful season opener last April at Monza, where he claimed the pole position to clinch the Race 2 victory in the Lamborghini Super Trofeo Europe for Imperiale Racing, Alberto Di Folco is set for the Italian GT Endurance curtain-raiser this coming weekend at Pergusa, driving a Huracán GT3 Evo car of the Modena-based squad with the Lamborghini Genève support. more >>


Victory and leadership in the GT Open for Michele Beretta


Beretta wins race-2 in the first round of the International GT Open at Paul Ricard and is the leader of the championship thanks to an excellent job done with the team, the Vincenzo Sospiri Racing and his team mate Frederik Schandorff.

Michele made his debut more >>


The start of the International GT Open season presented JP Motorsport with a challenge. After a strong performance in qualifying, the McLaren 720s with Christian Klien on board had to finish the race on the first lap through no fault of his own. A successful comeback followed on Sunday with the fourth overall place in the second race, resulting in the Pro-Am victory at the Circuit Paul Ricard. more >>


On the eve of the first round of the International GT Open Michele is looking forward to tackling this new engagement at the wheel of the Lamborghini. With Frederik Schandorff and the Vincenzo Sospiri Racing alongside him, he has what it takes to aim for the top of the championship.  more >>


Shanghai International Circuit, ChinaAfter a sabbatical of more than 12-months, sporting competition in China is finally starting to return to venues all across the country despite the ongoing effects of the pandemic which continues to more >>


The International GT Open event in Paul Ricard is on the agenda of JP Motorsport this weekend. Christian Klien and Patryk Krupinski will be racing with the McLaren 720S GT3 for the first time.


INTERNATIONAL GT OPEN AND GT OPEN CUP       AKM Motorsport by Antonelli starts its International GT Open campaign at Le Castellet this coming weekend, 14/16 May. The San Marino-based squad, in its third year with the Mercedes, will line-up two AMG more >>


Coppa Italia – From seventh on the grid to the podium

On the second weekend of the Italian club sport racing series Coppa Italia Turismo Carlotta Fedeli managed a remarkable recovery in the first sprint. The 29-year-old driver had started seventh in the Audi RS 3 LMS fielded by RC Motorsport at Imo more >>


Petr Kacirek clinched a trophy for Team Duck Racing in the second round of the Eset Cup. The Czech crossed the finish line in third place in the GT3 class in the Audi R8 LMS in the second sprint race at the Slovakiaring. more >>


The Norwegian GT race series featured an Audi R8 LMS for the first time. Local race driver Wiggo Dalmo won the first sprint with a ten-second advantage on the Vålerbanen circuit in the inaugural event. In the seco more >>


The Audi customer team YC Racing started the new GT Super Sprint Challenge race series at Shanghai with a good result. Ray Wu from China in the team’s Audi R8 LMS improved from fourth on the grid to second position in the Am Masters class in the first race. In the second race, Xing Yanbin in another Audi R8 LMS overtook his more >>


Richardson Racing secured a brace of rookie class podium finishes from the opening rounds of the new Michelin Ginetta Junior Championship season at Thruxton.The Corby-based team headed for the more >>


Breakell Racing enjoyed a fantastic debut weekend of Ginetta competition at Thruxton (08/09 May), with a standout performance seeing Max Coates qualify on the front row and challenge for a podium finish in the Protyre Motorsport Ginetta GT5 Challenge.The Lanca more >>


Jay Morton races into Britcar Championship with Praga and Motus One


Wolf Racing Cars kicked off its season on a high last weekend in Monza in the fourth year as the soul of the Italian Sports Prototypes 2018-2022 with the successful Wolf GB08 Thunder pushed by the Aprilia 1.0 engine and fitting Yokohama tyres. The new single-make formula for the sports prototypes developed by the Italian manufacturer did not experience any crisis as 21 Thunder challengers got o more >>


Excitement and twists characterized the opening round of the Italian GT Sprint 2021 Championship that has been run in Monza and Imperiale Racing confirmed its value with the usual grit being among the protagonists of the highest class of the Italian GT cars.The Mirandola-based te more >>


Richardson Racing can today confirm that it will field a multi-car line-up in the 2021 Michelin Ginetta Junior Championship, which kicks off this weekend at Thruxton.The Corby-based team will head into the new season looking to maintain the front-running form it more >>


The Italian GT Championship kicked off the 2021 season on the first weekend in May in Monza (ITA).


Among those in action again: BMW Team Italia. It proved to be a successful start to the season for the #215 BMW M4 GT4. more >>


The BMW M2 CS Racing Cup Italy held its first races of the 2021 season in Monza, Italy on the first weekend of May. Race one on Saturday saw heavy rain.
The first win of the year was secured by Filippo Maria Zanin (ITA) in the #19 BMW M2 CS Racing of Pro Motorsport BMW more >>