CLOSE CALL:
Lewis Hamilton said he was grateful his car’s halo had saved him during a dramatic airborne crash that Italian Grand Prix stewards blamed on Max Verstappen

Daniel Ricciardo won the Italian Grand Prix on Sunday as Max Verstappen was blamed by the Monza stewards for a dramatic airborne crash with Lewis Hamilton, who said his car’s halo safety device “saved my neck.”

Red Bull’s Verstappen, who leads his Mercedes rival by five points in the Formula One standings, must serve a three-place grid penalty at the Russian Grand Prix in a fortnight’s time for his role in the frightening crash.

Ricciardo had nipped past pole-sitter Verstappen at the start to lead virtually throughout, with the Australian followed across the line by his McLaren teammate Lando Norris. 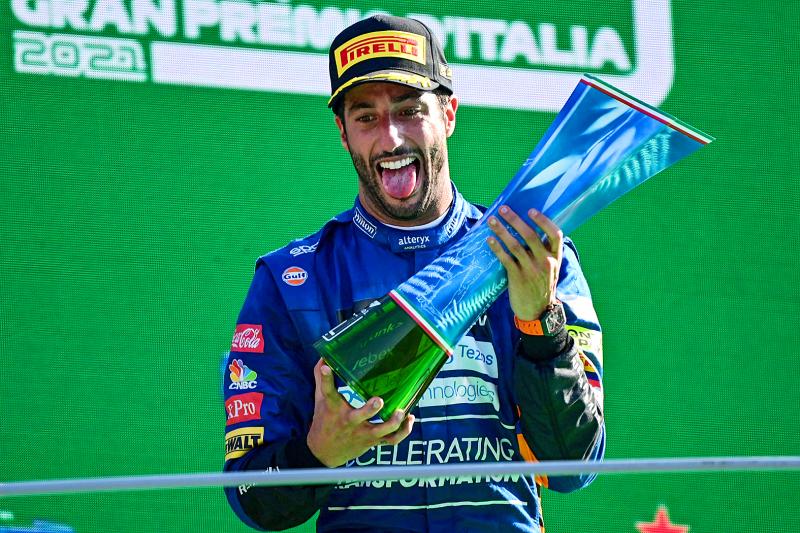 It was the British team’s first win since 2012 and their first one-two finish in 11 years.

Ricciardo’s path to his first win since Monaco 2018 was eased when Verstappen tried to muscle past Hamilton who had just rejoined the track after a pit stop on lap 26.

However, Verstappen’s car, pushed onto the sausage kerb at the Turn One chicane, ended up with its back wheel rolling over the top of his rival’s Mercedes, the halo protecting Hamilton’s head. 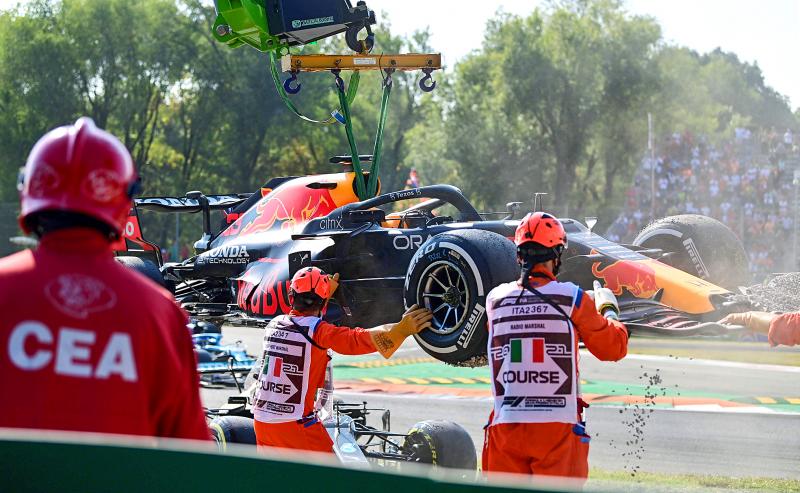 Both drivers slid into the gravel and were forced to retire.

“I feel very fortunate today,” Hamilton said. “Thank God for the halo which saved me, and saved my neck.”

“I am so grateful I am still here. I feel incredibly blessed that someone was watching over me today,” the seven-time world champion said. “I don’t think I’ve ever been hit on the head by a car before — and it is quite a big shock for me.”

“We are taking risks and it’s only when you experience something like that that you get the real shock of how you look at life and how fragile we all are,” he added.

The stewards’ verdict after interviewing both drivers said that although Hamilton’s line forced Verstappen onto the kerb, the Red Bull man had attempted the maneuver too late for him to have “the right to racing room.”

They said Verstappen was “predominantly to blame.”

“The championship was good fun up until now, but we saw the halo save Lewis’ life today,” Mercedes team principal Toto Wolff said. “We don’t want to see someone seriously hurt.”

Meanwhile, Ricciardo was celebrating the sweet taste of victory with his trademark podium celebration of drinking champagne from his shoe.

“To lead literally from start to finish, I don’t think any of us expected that. There was something in me on Friday, I knew something good was to come,” Ricciardo said. “To not only win, but to get a one-two, it’s insane. For McLaren to be on the podium it’s huge, let alone one-two… For once I’m lost for words.”

Comments will be moderated. Keep comments relevant to the article. Remarks containing abusive and obscene language, personal attacks of any kind or promotion will be removed and the user banned. Final decision will be at the discretion of the Taipei Times.