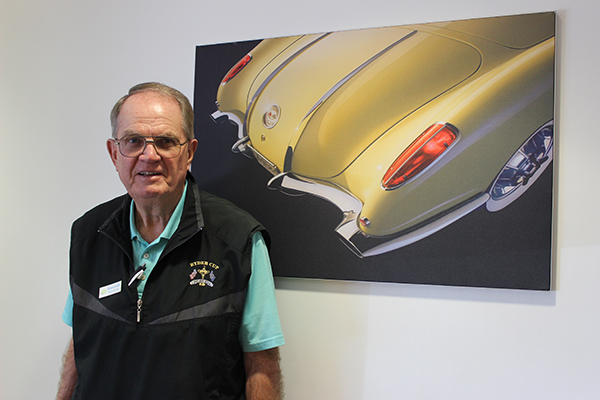 “Listen to what the doctor tells you… I’m almost 78 and I’m still here.”

After over 40 years in the business, Richard Centilli of Clio, Michigan, is normally waiting for this year’s latest car models to hit the showroom floor at the dealership where he works. When he was told that he had to seek treatment for prostate cancer, little did he know the latest muscle machine available to fight cancer was nearby.

“He said they had this machine and it’s supposed to work really good for what I had, so they were going to use it.”

Richard was referred to Omar Gayar, MD, board-certified radiation oncologist at the McLaren Proton Therapy Center in Flint. Like some, Richard had not heard about proton therapy before he was referred to Dr. Gayar.

“Many patients, like Mr. Centilli, are motivated to treat their prostate cancer aggressively. Of course, at the same time, they are concerned about their quality of life and side effects of any treatment,” said Dr. Gayar. “Proton therapy offers significant benefit with this regard. It can help target the prostate and drastically reduce the dose to organs like the bladder and rectum, leading to significantly less side effects.”

Proton therapy, also known as proton beam therapy, is one of the most advanced radiation cancer treatments available. This treatment is non-invasive, patients experience minimal side effects, and proton therapy results in a better quality of life during and after treatment compared to receiving conventional radiation therapy treatments.

“How could I say – it was just normal living,” said Richard. “I never experienced anything bad at all. It was just like going to work, working eight hours, and going home. I’d just go in, have it done and come to work. I was there at 8 o’clock every morning. I was out by 8:20. It was only about a 10-minute procedure, so it wasn’t time consuming.”

In the end, after 44 treatments, Richard says everything is going well.

“I went back to see the doctor that I originally saw at McLaren and we went through some things. They took a blood test and it was good. So, every six months they will watch it.”

Richard has some advice for men when it comes to prostate and general health.

“Listen to what the doctor tells you, do what he tells you to do. I’ve had two open heart surgeries, I’ve had five bypasses, a pig valve put in and I feel great. I’ve had part of my intestine taken out and my gallbladder taken out. You just do what they tell you and here I am. I’m almost 78 and I’m still here.”

To learn more about proton therapy treatments for prostate cancer, view this video.

Request more information or an appointment at the McLaren Proton Therapy Center by visiting mclaren.org/proton_forme.