Time and time again we’ve seen the Tesla Model S Plaid put much more expensive supercars and hypercars in their place by going down to the drag strip and showing them who’s really the boss of the 1/4-mile.

In fact, long before the Plaid trim level of the Model S with its tri-motor design and more than 1,000 horsepower, the Model S was still dominating drag strips. Take things all the way back to the original quick Model S, the P85 Performance, and we see that the sedan was already pretty dominant.

Nevertheless, the greatest weakness of the Model S and its siblings, the Model 3 and the Roadster, has always been the lack of lap after lap performance. The Model S Plaid even takes around 10 minutes of warm up time (and a 1-foot rollout) before it can even hit its 0-60 time of 1.99 seconds.

So how will one fair with a nearly dead battery against the fastest acceleratiing production Lamborghini (as the DragTimes guy calls it), the Huracan EVO? Turns out just about the same as one with a full battery.

The 640-horsepower produced by the V10 in the Lamborghini is simply no match for the Plaid in a straight line. The only time that the Lamborghini looks even slightly competitive in the three races held is the second one, where the Tesla driver intentionally waits for the Huracan to go before hitting the accelerator.

How’s this possible? Well, how much does your phone slow down when it’s sitting at 25% battery versus when it’s at 100%? It’s likely that you don’t notice a difference and that’s the key here. So long as there’s enough charge to go down the road at speed, the Tesla is going to be nearly identical in performance race after race.

That’s what makes it such a potent drag car, relatively little skill is needed to keep it straight while you’re demolishing people in cars that can’t keep up. 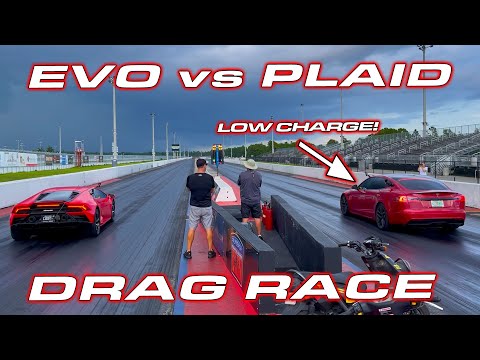