Just when we thought Lamborghini was done with the Aventador, a mysterious one was spied just outside the Sant’Agata Bolognese factory. But wait, they are done with their flagship supercar, or at least that’s what they said when they unveiled the Ultimae a couple of months ago, so what’s up with this alleged prototype?
As a matter of fact, no one can answer that question, save for Lamborghini officials, of course, and since automakers don’t comment on speculation and possibly future products, good luck finding out anything about it.

Up front, this Aventador looks pretty much like an S. Nothing suspicious so far, but the rear end is totally different. For one, it is missing a good chunk of the rear bumper. It also has three exhaust pipes mounted in the middle of the diffuser, flanked by two canards finished in blue for whatever reason, whereas the rest of the car has a satin black look.

Could they perhaps be testing aerodynamic upgrades for the V12-powered supercar? It sure seems so, but as we mentioned above, they officially bid farewell to it with the Aventador Ultimae. Thus, the only reasonable explanation is that they are collecting data for a future model. Either that, or they are testing certain features for their next flagship machine.

By nature, Aventadors are not only fast but also quite sonorous. The thing is that this one sounds rather tamed, so does it indeed feature a naturally aspirated V12 behind the seats? Your guess is as good as ours, though if the answer is yes, then they have definitely made it more civilized. And if it’s no, then is that a V8 or a V6, and if so, does it have electric assistance? Too many questions for a short video, so you might as well hit the play button and let us know what you think about it in the comments section down below. 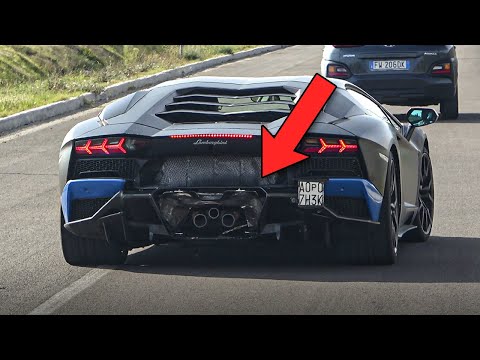