A video is going viral on social media showing a woman rear ending a man’s $500,000 Lamborghini Aventador and blaming him for “hitting the front of her car.”

In the clip, the astoundingly patient Lambo owner is seen dealing with an aggressive driver who just rear-ended him. As the woman approached the man’s car, she starts yelling at him as he laughed. At the beginning of the video, the young woman angrily got out of her Audi which was left in the middle of a busy road.

She approached the man’s vehicle, which he parked at a gas station and she knocked on the man’s door. As she pointed to her vehicle, she accused him of hitting her car, “you hit my car, you did that to the front of my f***ing car.”

After he starts laughing, she asks him, “What’s funny? That’s my new fucking car!” 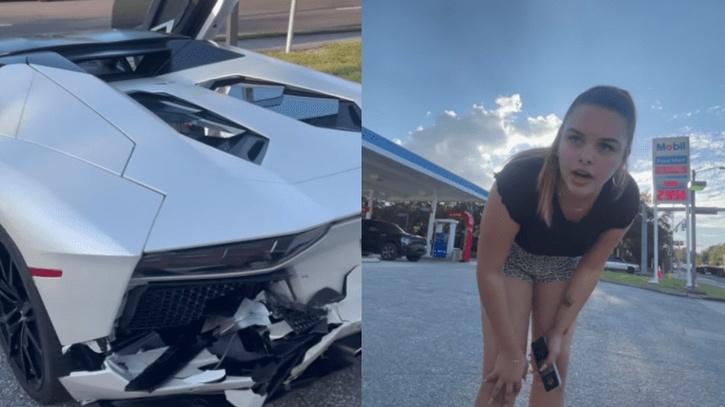 “Well, when you rear-end people, that’s not how this works,” he responds. “It’s okay; I’ll call the cops real quick. You’re saying that I hit you from behind.”

“No, you hit me in the front of it. Remember, I was at the red light, and you went in front of me and hit my car,” she says, which is not true according to the security footage.

As the woman walked away from the scene, she kept yelling the the driver before a man, presumably her friend, took her away.

The viral video ended with an image that showed the extensive damage to the back of his luxury white Lamborghini.

Fortunately, no one involved in the incident seems to have suffered any serious injuries, though the cars are worse for wear. Damage to the Audi is hard to glean, but the Aventador rear bumper is seriously squashed.